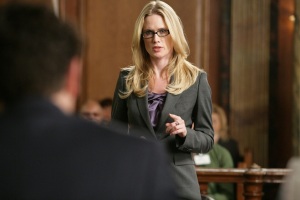 According to Variety, March will play Akira, an alien from a planet far away who has been hiding on Earth. As soon as she gets her powers and starts her superhero journey, Naomi will ask Akira to guide her. In the comic books, Naomi comes from an alternate universe’s Earth. However, if an alien will serve as her guide in The CW’s shows, maybe the series will retcon Naomi’s origin and turn her into a visitor from outer space.

Besides starring in Law & Order: Special Victims Unit as New York Assistant DA Alexandra Cabot, March has recently shown up in the mockumentary film The Social Ones, which she also executive produced. The Social Ones won Cinequest’s Award for Best Comedy Feature in 2020. In addition, March also played Ivanka Trump in Comedy Central’s satiric series The President Show.

Naomi was introduced by Brian Michael Bendis in 2019’s Naomi: Season One, a comic book arc that ended with the heroine joining the Young Justice. In less than two years before her creation, Naomi has already ascended to stardom by becoming a member of the Justice League, where Aquaman gave her her official moniker: Powerhouse. The explosive reception of Naomi in the comics ensured the production of a pilot at the end of 2020. Last May, the series was greenlit for an entire season, which means Naomi will soon join The CW‘s Arrowverse.

Naomi is not the only comic book adaptation in which DuVernay was recently involved. Besides executive producing Naomi alongside Jill Blankenship (Arrow), DuVernay was supposed to direct the canceled New Gods movie. She is also set to direct the pilot for the DMZ miniseries at HBO Max series, another DC Comics IP. DMZ is being adapted by Roberto Patino and will show an apocalyptic version of America where a second Civil War happened.

Naomi has no release date yet, but since the series started production last August, we can expect it sometime in 2022.