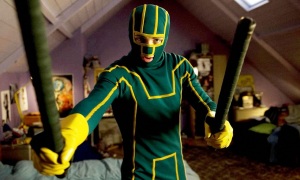 Back in 2010, before the superhero genre became home to the most popular movies on the planet, director Matthew Vaughn teamed up with writer Jane Goldman and brought Mark Millar and John Romita Jr.’s comic book Kick-Ass to movie screens. Unlike the other PG and PG-13 comic book movies at the time, Kick-Ass was loaded with brutal-yet-stylish kills, foul-mouthed dialogue from a kid (Chloë Grace Moretz in her breakout role as Hit-Girl), a powerless Peter Parker type (Aaron Taylor-Johnson), and Nicolas Cage as the vigilante Big Daddy. While many fans loved what they were seeing, others were outraged, condemning the film for its language and extreme violence.

The film only grossed just below $100 million at the worldwide box office, but it exploded on home video, leading to a sequel and a whole lot of merchandise, which is still readily available online and at every Comic-Con.

As you can imagine, when you have a property with strong name recognition and a lot of fans, people always want more. In fact, a few years ago, Vaughn said he was working on a Kick-Ass reboot that could potentially find Patience Lee, an African-American single mother taking on the vigilante mantle, stepping into the lead role. Since that time, news about more Kick-Ass movies has been quiet. But that changed the other day during a group interview that I was part of for his upcoming Kingsman prequel, The Kings Man.

When asked about the status of Kick-Ass, Vaughn said:

“We’ve got a big reboot of Kick-Ass in two years. Big reboot.”

He went on to say:

“It’s so fucking nuts that I can’t talk about it. But we’ve got that ready to go. All the rights revert back in two years and then we’re going to reboot it where people will be like, he is insane.”

Needless to say, the small group of reporters I was with pressed for more information because how could we not after that answer. We then asked why he wanted to reboot the property rather than make Kick-Ass 3. He told us:

“Because I think the clue is in the title. I think Kick-Ass became a new type of genre. Everyone was like, ‘Oh, you can’t make R-rated superheroes. No one will want to see an R-rated superhero. You can’t do this. You can’t do that.’ So, I had this idea, and it was so nuts that I went, ‘Yeah, great. It’ll cause just as much controversy, and everyone will talk about it and as many people that love it will hate it.’ But I’m not saying it hasn’t got the characters in it and won’t have, you know. I’m just saying it’s not what anyone could be imagining what it is. And I’m going to need one very, very brave actor or actress to play the new Kick-Ass because it will scare the shit out of them.”

Based on this answer, it’s clear the role of Kick-Ass is not Patience Lee, very much up for grabs, and could be played by literally any actor working. Which I love. The idea of gender-swapping some of the roles and turning everything you know about the property on its head works for me.

In addition, after talking to Vaughn during this group interview, I spoke to him to ask about the rights to the property and how it works. He told me Marv Films (his company) owns the rights to the property, but they were licensed out to different companies in each territory like France, Germany, and the United States for ten to thirteen years. Once the rights revert back to Marv, they own the films and can do whatever they want with them. This explains why he’s waiting till the rights come back to make another film, because the reboot could be sold to the highest bidder, and with the name recognition, it will be something I’m sure many studios are interested in.