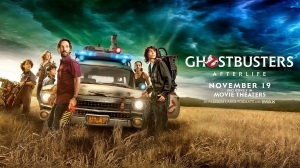 Franchises love dropping little treats in the form of callbacks or Easter eggs, and the creative team behind Ghostbusters: Afterlife is no different. In a new featurette, fans are taken on a trip behind all of the well-hidden Easter eggs in the latest Ghostbusters installment. The walkthrough shows viewers cameos, homages, and more as the narrator takes us through the hidden goodies in Afterlife.

A tribute to the original film’s director, Ivan Reitman, can be found on the back of a truck featured in the film. If you look closely, you can see that the truck says “Ivanbuilt Est. 1946.” This shoutout is made for the Reitman who directed both the first and second installments of Ghostbusters. Reitman was born in 1946, which is where the label’s date comes from. Reitman’s son, Jason Reitman, picked up where his father left off and served as the director for Ghostbusters: Afterlife.

Another Easter egg comes to us in the form of a license plate on a Subaru Outback. This one is a little tough to spot and definitely hard to decode. The car’s plate reads “48IRG91,” which when unscrambled stands for: “Ivan Reitman’s Ghostbusters, 1984.” Wouldn’t have gotten that one without the breakdown!

Everyone’s favorite look into the spirit world, “Tobin’s Spirit Guide” also gets a spot in the new film. The original Ghostbusters, specifically Egon (Harold Ramis) and Ray (Dan Aykroyd), constantly referred to and used the book to learn more about the entities that they were up against. In Afterlife, the book is found in the farmhouse and it comes in handy to help the kids uncover some of the unfolding mysteries surrounding them.

Ghostbusters: Afterlife hit theaters on November 19th, 2021, and served as a follow-up to 1989’s Ghostbusters II. It is set 32 years after the events of Ghostbusters II and follows Egon’s daughter, Callie, and her children, Trevor and Phoebe, who move into Egon’s farmhouse after he dies of a heart attack. Paranormal events and beings soon begin to present themselves to the kids and they get swept up in a ghost-busting adventure while uncovering secrets about their grandfather.

Check out the full Easter egg breakdown below and if you missed it in theaters, Ghostbusters: Afterlife is currently available on Digital and is set to be released on DVD and Blu-Ray on February 4.