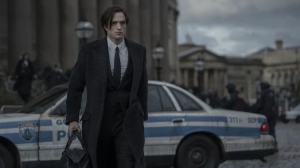 Warner Bros. isn’t flinching in the face of the omicron variant, as it marches toward the theatrical release of The Batman. The studio’s Indonesia division on Monday debuted a new TV spot, which reveals previously unseen glimpses at director Matt Reeves’ bold new take on the iconic superhero.

Titled “Game,” the 30-second spot also highlights the noir tone that Reeves has been teasing, and offers a better look at the cat-and-mouse games between The Dark Knight (Robert Pattinson) and The Riddler (Paul Dano).

“I’ve always loved little puzzles,” the villain says in the spot, before repeating the riddle that we first heard in a previously released trailer: “It can be cruel, poetic, or blind. But when it’s denied, it’s violence you may find.” We see a quick shot of Jeffrey Wright’s James Gordon with a puzzled look on his face, as he realizes that the Riddler’s next target is none other than Bruce Wayne.

“The answer’s justice,” Pattinson hisses in his rather unique Batman voice. It isn’t at all like the guttural growl that Christian Bale famously adopted in his three outings as the Caped Crusader, nor is it like the technologically-enhanced rumble that Ben Affleck used in Batman v Superman: Dawn of Justice and Justice League.

Meanwhile, Bruce notices strange symbols all over Gotham City, as The Riddler compels him to follow along with his elaborate game, taunting him as he does it. Reeves has cited cultural artifacts such as the real-life Zodiac killer and Gus Van Sant’s Last Days as having influenced The Batman. Unlike the previous big-screen Batman movies, Reeves’ near-three-hour epic will emphasize Batman’s reputation as “The World’s Greatest Detective,” as he tries to stop the serial killer. The filmmaker confirmed in a recent interview with MovieMaker Magazine that The Riddler’s killing spree will begin at the highest levels of Gotham City politics, with Gordon and Batman trying to solve the murders “in a classic kind-of-detective story way.”

W.B. is bullish on Reeves’ take, as evidenced by the studio’s unwavering dedication to releasing the film exclusively in theaters, but also in its plans for the franchise’s future. In addition to two more theatrical follow-ups, The Batman is expected to kick off a new universe that also includes HBO Max shows—one of which is a procedural following the exploits of the Gotham City police department and the second a Scarface-style crime story about the crime lord Penguin.

The Batman also stars Zoe Kravitz as Catwoman, Colin Farrell as Penguin, John Turturro as Carmine Falcone, Andy Serkis as Alfred Pennyworth, and Barry Keoghan as a GCPD officer. The film will arrive in theaters on March 4, and on streaming 45 days later, as a part of W.B.’s restructured theatrical release strategy. You can watch the spot here, and read the official synopsis down below:

In his second year of fighting crime, Batman uncovers corruption in Gotham City that connects to his own family while facing a serial killer known as the Riddler.