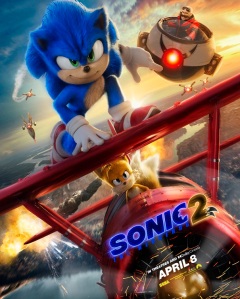 With the release date of Sonic The Hedgehog 2 fast approaching, Paramount has released a new spot for the video game adaptation ahead of this Sunday’s Super Bowl. The new spot puts a spin on the idea of “head or tails” — a joke that was too clever to pass up — offering a better glimpse at the two new characters fans are excited to see, Tails and Knuckles.

The teaser also ramps up the rivalry between Sonic and Knuckles, as the newly introduced villain tells the titular hero that it is his destiny to destroy the blue speedster. Fans also get a glimpse at the return of James Marsden’s Tom Wachoswki as he encourages Sonic to be become a hero, while Jim Carrey’s scene-stealing Dr Robotnik tells Knuckles to “work smarter, not harder”. For those who can’t wait to see the dynamic duo working in tandem on the big screen, a scene of Sonic and Tails in his iconic red plane also round out this new TV spot.

The short TV spot is action-packed and has its moments of humor, and even comes with a Winter Soldier joke that Marvel fans will recognize. This actually lends to an interesting PR trend that Sonic The Hedgehog 2 has adopted – that is, embracing franchises that have become before. Fans will rememberMatrix: Resurrections tribute teaser that was released in December 2021.

Idris Elba’s voice work as Knuckles is already truly something to behold, as the actor manages to balance menace and grit pretty well. This is not surprising, as the actor has shown he can knock it out the park when it comes to voice acting — his role as Zootopia’s police chief is a recent testament to that fact. Besides Marsden, Elba and Carrey, Sonic The Hedgehog 2 also stars Ben Schwartz as the voice of Sonic, Tika Sumpter, Natasha Rothwell, Adam Pally, and Lee Majdoub. New cast members includes the aforementioned Elba as the voice of Knuckles, Colleen O’Shaughnessey as the voice of Tails, and Shemar Moore.

The first entry in the movie franchise – Sonic The Hedgehog, was a surprise hit in 2020, making over $300 million at the box office, as such, the excitement surrounding this sequel is palpable and understandable. Sonic The Hedgehog 2 is directed by Jeff Fowler, and was written by Pat Casey, Josh Miller and John Whittington. Both Casey and Miller also penned the first Sonic film.

Sonic The Hedgehog 2 hits theaters on April 8. Check out the new Super Bowl spot below: