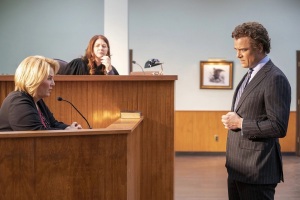 Renée Zellweger is the queen of transformation. After famously putting on twenty-five pounds to play the title character in Bridget Jones’s Diary, the two-time Academy Award winner is once again letting go of vanity in order to star in a project – but this time, she’s embodying a real person in the upcoming NBC limited series The Thing About Pam. Based on the Dateline podcast of the same name, the series centers around a brutal murder that revealed extremely dark schemes perpetrated by an ordinary woman called Pam Hupp (Zellweger).

The trailer reveals that the true crime series will play out like FX’s Fargo – a story of extreme violence with a cast of characters and beats so unbelievable you can’t help but laugh. All of this is led by a barely recognizable Zellweger, who is out to mislead everyone she meets while gulping down huge amounts of soda from a supersized cup. Also revealed by the trailer is the curious and bizarre behavior of Pam Hupp, who is a compulsive liar that doesn’t even worry about consistency with whatever story or act she makes up. Luckily for Pam, she meets a prosecutor who will do everything she can in order to defend her and pin the murder of Betsy Faria (Katy Mixon) on her husband.

The Thing About Pam is adapted for television by Jenny Klein, who has written for Netflix’s The Witcher, Marvel‘s Jessica Jones, and several episodes of The CW’s Supernatural. Klein also serves as showrunner for the limited series.

Aside from Zellweger, The Thing About Pam also stars Judy Greer as Leah Askey (the fierce prosecutor), Glenn Fleshler as Russ Faria (the husband of the victim who was wrongfully convicted), Josh Duhamel as Joel Schwartz (Russ’s defense attorney), Sean Bridgers as Mark Hupp (Pam’s husband), and Mac Brandt as McCarrick, a detective assigned to investigate the murder of Betsy Faria.

The Thing About Pam premieres on NBC on March 8. Check out the new trailer below:

And check out the show’s official synopsis here:

NBC’s “The Thing About Pam” is based on the 2011 murder of Betsy Faria that resulted in her husband Russ’ conviction, although he insisted he didn’t kill her. He was later exonerated. This brutal crime set off a chain of events that would expose a diabolical scheme deeply involving Pam Hupp. A thorough examination of the scheme was featured on several episodes of “Dateline NBC,” becoming one of the most popular topics to ever air on the hit franchise. It also became the subject of a popular 2019 podcast, “The Thing About Pam,” which remains one of the most downloaded podcasts on Apple Podcasts.