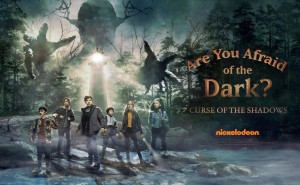 The horror genre is not just for adults, and the children’s horror sub-genre has made a comeback in the last few years. Recently, it was even announced that R.L. Stine’s Goosebumps was getting a reboot series on Disney+. However, every 90s kid knows that one of the best horror anthologies around was Nickelodeon‘s Are You Afraid of the Dark?. In 2019, the popular show got a reboot series from Nickelodeon, and now the children’s network announced that Are You Afraid of the Dark? has been renewed for a third season.

The announcement was made at Nickelodeon‘s Upfront on Thursday. The third season for the anthology series will be subtitled Ghost Island. The story will follow new characters, just like the previous two seasons, who think they are attending a “fun” vacation on a resort island. The new members include Telci Huynh as Kayla, Conor Sherry as Max, Luca Padova as Leo, Dior Goodjohn as Summer, and Chance Hurstfield as Ferris. The cast also features Julian Curtis as Stanley Crane, who is the hotel manager at the island resort.

The original Are You Afraid of the Dark? was seen by many of its fans as the slightly more mature version of Goosebumps, which aired around the same time in the mid 1990s. That series lasted for seven seasons from 1992 to 1996, with the last two seasons running from 1999-2000. The set-up of kids from “The Midnight Society” telling scary stories around a campfire is just classic.

While the reboot series has been a little more kid friendly when compared to the original, that does not mean it has not captured the spooky fun magic of the original. Both the carnival setting of Season 1 and the creepy Shadowman of Season 2 have provided franchise fans with a lot of good campy scares. The reboot has forgone the episodic anthology format of the original for a more modern seasonal anthology approach, comparable to other horror series like American Horror Story. That has helped refresh the series with more complex and expansive stories. There is no confirmed number of episodes yet, but given that last season contained six episodes, it is safe to assume the new season will have around the same amount.

Are You Afraid of the Dark?: Ghost Island is currently in production in the Dominican Republic and will premiere on Nickelodeon later this year. Since this is a horror series, that time frame may line up perfectly for a Halloween release.