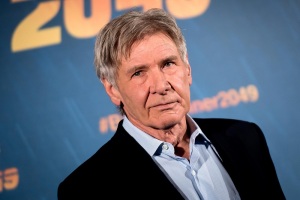 Harrison Ford has just officially signed on to star in a main role in Apple TV+‘s newest comedy series, Shrinking, which follows Jimmy (Jason Segel), a grieving and burnt-out therapist who decides to start to tell his patients exactly what he’s thinking. Segel also serves as the creator of the upcoming series, as well as an executive producer. Bill Lawrence and Brett Goldstein, who both worked on Ted Lasso, are also executive producers and writers on the ten-episode series.

Ford, who has never been a series regular on a television show before, will be playing Dr. Phil Rhodes. Dr. Rhodes is described as a “blue-collar shrink”, a man who tells it like it is but with a caring charm. Rhodes is a trailblazer in Cognitive Behavioral Therapy, and owns his own practice along with his two proteges, Jimmy and Gaby. Phil’s life takes an unexpected turn when he is diagnosed with Parkinson’s disease. This brilliant mind will have to overcome new obstacles, like his overbearing friends and family, and learn how to deal with his legacy with these new changes.

Shrinking will be the second Apple TV+ project to star Segel, after this year’s adaptation of The Sky is Everywhere. It will also act as the third time Lawrence partners with both Apple and Warner Bros. Television, after Ted Lasso and the upcoming series Bad Monkey. Other executive producers on Shrinking include Neil Goldman, Jeff Ingold, and Liza Katzer.

Ford is a legendary actor who is best known for playing Han Solo throughout the Star Wars franchise, and starring as the title character in Steven Spielberg’s beloved Indiana Jones franchise, beginning with Raiders of the Lost Ark. Ford has been a beloved movie star for six decades, appearing in many notable films including Blade Runner, The Fugitive, Clear and Present Danger, Working Girl, and Witness, which he was nominated for an Oscar for Best Actor. He is next slated to star in a fifth Indiana Jones film that is set to be released in 2023, and is the first in the franchise to not be directed by Spielberg, with James Mangold taking over the director’s chair.

Shrinking is currently in pre-production, but it is not currently clear when the show will drop on Apple TV+. Check out the official logline for Shrinking below:

“Shrinking” follows ‘Jimmy’ (Segel), a grieving therapist who starts to break the rules and tell his clients exactly what he thinks. Ignoring his training and ethics, he finds himself making huge, tumultuous changes to people’s lives…including his own.”