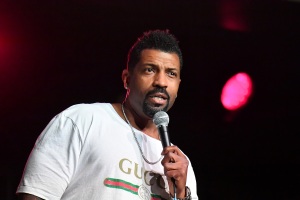 Deon Cole (black-ish, The Harder They Fall) has signed on to lead upcoming BET+ original series Average Joe, which will hail from Robb Cullen (Cop Out) and McG (Charlie’s Angels). Deadline was the first to report the news. The series has a cast contingent script-to-series order, which means that the series (not just a pilot) will be ordered once some top names sign on to the project. Cole is undeniably a step in that direction.

The plot for Average Joe is as follows:

“Set in The Hill district of Pittsburgh and inspired by Cullen’s life, ‘Average Joe’ follows blue-collar plumber Joe Washington (Cole) who discovers his recently deceased father lived a secret, second life and stole millions of dollars from dangerous people just before he died. Now those people think Joe knows where it is. A bloody and violent confrontation triggers a chain of events that force Joe and his close-knit circle of family and friends out of their very average and mundane lives into a life or death race against time to find the truth and the millions.”

Cole is perhaps best known to audiences for both Black-ish and spinoff series Grown-ish. There, he plays Charlie Telphy, a co-worker and best friend to Anthony Anderson‘s Dre Johnson. His role as Charlie is an excellent showcase of Cole‘s comedic chops and it will be interesting to see what he brings to Average Joe.

Per the synopsis, Average Joe will be a dark comedy, and an action director like McG has the resume to bring a series like that to life. It’s a bit of a new direction for Cole, who has primarily stuck to comedies. However, he did recently appear in Jeymes Samuel‘s Netflix western The Harder They Fall opposite Idris Elba and Jonathan Majors. He also will soon appear in Kenya Barris‘s feature You People with Eddie Murphy and Jonah Hill, as well as next year’s The Color Purple, which will adapt the musical version of the material. Alfonso is the character Cole will play, which is a small but pivotal role.

BET+ is the streaming, on-demand extension of the BET Network which first launched in late 2019. The platform has put forth eight series so far, with three of those being dramas. Tyler Perry oversees several of the programs, which include Ruthless, All the Queen’s Men, First Wives Club, and The Ms. Pat Show. There are also unscripted series on the service, which include the docuseries American Gangster: Trap Queens.

With Cole signing onto the series, Average Joe should be moving into production soon.