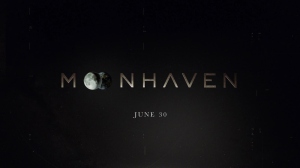 Moonhaven takes place 100 years in the future where a utopian community has been built on the moon. The community has managed to grow life there in hope of finding a way to solve the problems on Earth that are sending the human race towards their end. The series will follow McDonald’s character, a smuggler, who finds herself marooned on “Moonhaven” and gets wrapped up in a conspiracy to destroy the community.

The teaser trailer is only a quick fifteen seconds long but it still manages to tease some compelling visuals. The teaser starts with a small plant starting to grow in the footprint of an astronaut’s boot. Then we see a shot of the moon where a huge forest seems to have sprouted around a lake. We then get some quick shots of the stars like McDonald’s character walking through a forest, Monaghan’s standing by a lake, and Manganiello’s sporting a mohawk and giving us the only line of the trailer, “see you on the moon.” The teaser trailer doesn’t reveal much but does give enough to grab the audience’s attention.

Moonhaven is coming from creator and showrunner Ocko. In addition to Lodge 49 and Black Sails, his other credits include executive producer roles on series like Elementary, Pushing Daisies, and The Office. Moonhaven will also be executive produced by Deb Spera.

Moonhaven will premiere its six-episode season exclusively on AMC+ on June 30. Watch the teaser trailer down below:

Here’s the official synopsis for Moonhaven:

Moonhaven centers on Bella Sway (McDonald), a lunar cargo pilot and smuggler 100 years in the future who finds herself accused of a crime and marooned on Moonhaven, a utopian community set on a 500 square mile Garden of Eden built on the Moon to find solutions to the problems that will soon end civilization on Mother Earth. A skeptic in Paradise, Bella is sucked into a conspiracy to gain control of the artificial intelligence responsible for Moonhaven’s miracles and teams with a local detective to stop the forces that want to destroy Earth’s last hope before they are destroyed themselves.