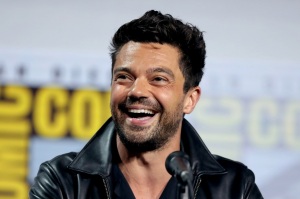 Paramount and the BBC‘s new series The Gold has confirmed an impressive slate of actors, according to an exclusive report by Deadline. The series is inspired by the true story of the infamous 1983 Brink’s-Mat robbery and the years-long domino effect that stemmed from it. The crime took place at the Heathrow International Trading Estate in the United Kingdom, where millions of gold bullion, diamonds, and cash were stolen, much of which was never recovered. Not only was the crime remarkable for its scale, but it also provoked a series of repercussions, like controversy and murder, that lasted for way longer than anyone could have anticipated. Out of the six armed men that took part in the robbery, only two ended up being convicted.

The Gold will bring to life on the screen what was dubbed as the UK’s “crime of the century.” The cast that has now been confirmed to star in the series includes Dominic Cooper (Mamma Mia!), Hugh Bonneville (Downton Abbey), Jack Lowden (Dunkirk), Charlotte Spencer (Cinderella), Tom Cullen (Black Mirror), Emun Elliott (Prometheus), Sean Harris (Mission: Impossible), Ellora Torchia (Midsommar), and Stefanie Martini (The Last Kingdom).

The six 60-minute episodes of the series, which began filming earlier this month, were inspired by extensive research and interviews with people who were involved in the incident. The script was written by Neil Forsyth (Guilt). The series was co-produced by Tannadice Pictures and VIS, an international division studio belonging to Paramount, and is being directed by recent Academy Award winner Aneil Karia (The Long Goodbye) and Lawrence Gough (Doctor Who). The crime drama series was commissioned by the Director of BBC Drama Piers Wenger and Chief Content Officer Charlotte Moore.

Tommy Bulfin, the executive producer for the series and BBC Commissioning Editor, stated: “The fact that we have assembled such a talented and exciting ensemble cast is testament to Neil’s incisive interrogation of one of the most infamous robberies in British history and the remarkable events which came in its wake. And to have the brilliant Aneil Karia join fresh from his Oscar win is the icing on the cake. The BBC One audience are in for a real treat when this hits the screen.” The Gold will premiere in the UK on BBC One and BBC iPlayer, it will later become available in the US and other countries on Paramount+. There is no specific release date yet.