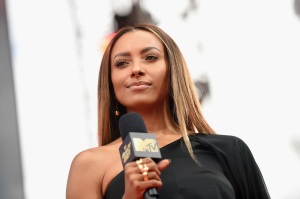 Netflix wants you to double down on looking forward to their upcoming romantic comedies. After announcing a food and wine-related romcom last week, the streamer now reveals a first look at Love in the Villa, a movie that will take us to one of the most romantic destinations in the world: Italy. The story centers around a young woman who decides to take a trip to Verona after a bad break-up. Upon arrival, she discovers the villa she reserved was double booked, which means she’ll have to share her vacation with a cynical British lad.

The first look images reveal Kat Graham (The Vampire Diaries) and Tom Hopper (The Umbrella Academy) as a couple who is probably not yet a couple. They’ve got that “you know what?” look that romcom characters get when they realize they actually enjoy each other’s company after bickering for a while. But seriously, who wouldn’t fall in love with one of those two? And during a summer in Italy, of all places. Way to set the bar, Netflix.

Love in the Villa will be another addition to a pleasant slate of romance movies set in Italy. From cinema classics like Roman Holiday to the romance Call Me By Your Name, the country has developed a cinematic “persona” that is perfect for couples falling in love. The hot weather provides a set-up for passion, while breathtaking locations make it easy to put you on a honeymoon state of mind. So you can’t really blame all those stories that take place all over the Italian territory for seeming hopelessly romantic.

Love in the Villa is written and directed by Mark Steven Johnson, who has quite an eclectic filmography: the filmmaker has helmed 2003’s Daredevil, Ghost Rider and Killing Season. At the same time, Johnson has repeatedly put his sensitive side on display by directing Simon Birch, as well as writing Grumpy Old Men, Jack Frost, and the story for the adorable Christopher Robin. In the romcom territory, the director brought to life When in Rome and Love, Guaranteed.

Aside from Graham and Hopper, the cast of Love in the Villa also features Raymond Ablack (Netflix’s Maid), Laura Hopper (BBC’s Doctors), Sean Amsing (The Mysterious Benedict Society), and Emilio Solfrizzi (School of Mafia). Netflix premieres Love in the Villa on September 1.