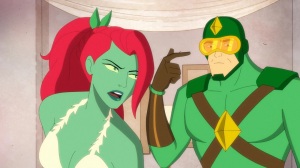 HBO Max announced today the order of Noonan, the working title for the ten-episode Kite Man-centric spinoff of DC’s Harley Quinn. The series will bring Matt Oberg back as the voice of the lovable and incompetent D-list villain and follow Kite Man’s adventures while he tries to become a bar owner.

While Kite Man is an often-ridiculed comic book villain, the character became a fan favorite after showing up in Harley Quinn’s as Poison Ivy’s (voiced by Lake Bell) boyfriend. The couple got together on Harley Quinn‘s first season, with Season 2 following the engagement of Poison Ivy and Kite Man. Unfortunately for Kite Man, Harley (voiced by Kaley Cuoco) burned their marriage to the ground after finding out she was in love with Ivy. So, while we are all delighted that Harley and Ivy are officially together as a couple for the show’s third season, Kite Man also deserves some slack.

Noonan will show what happened to Kite Man after breaking up with Ivy right before their marriage. Trying to get his villain life back on track, Kite Man will partner up with Golden Glider to buy Noonan’s Bar, the favored hangout place of Gotham’s criminals. The bar showed up several times in Harley Quinn already as the resting place for all supervillains looking to get a drink or discuss their new world domination plans. It will be interesting to see how the change in management will affect Gotham’s underworld and how Kite Man will use his (lack of) villain expertise to become a successful businessman.

“We love the wild and fun world of ‘Harley Quinn’ so much we just had to make a spin-off and who better to center it around than the outcast Kite Man. Justin, Patrick, and Dean have created the perfect local hangout for Gotham City’s not-so-finest at Noonan’s, where bar patrons can blow off steam after a long day of mayhem.”

“‘Harley Quinn’ unlocked a world of hilarious possibilities with the iconic superheroes and supervillains of the DC Universe. Exploring this world further with our partners at HBO Max and DC is going to be a lot of fun. Plus, after getting dumped by Poison Ivy, the least we could do was give Kite Man his own show.”

There’s still no release date for Noonan, but check out the official synopsis here:

Lovable loser Kite Man and his new squeeze Golden Glider moonlight as criminals to support their foolish purchase of Noonan’s, Gotham’s seediest dive bar, where everybody knows your name, but not necessarily your secret identity!