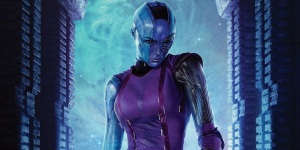 Karen Gillan, the actress that plays Nebula in the Marvel Cinematic Universe, has officially wrapped filming on Guardians of the Galaxy Vol. 3 and possibly on the MCU as a whole.

The announcement was made on Gillan‘s personal account on Instagram, which showed an image of Nebula’s glove placed in the center of Gillan‘s chair, the character’s name written across the back. Along with the image came a heartfelt caption by Gillan, where she thanks writer-director James Gunn for letting her play the character as well as voicing how much she enjoyed playing the fan-favorite character. She also says that she doesn’t know what is next for Nebula, and it might, in fact, be a swan song for her and the character.

I don’t know if Nebula will return beyond this, it’s possible that this is her final chapter. And if that’s the case, then I just want to say thank you to [James Gunn] for giving me such an interesting, complex, and fascinating character to play. I have enjoyed this exploration more than any other character I’ve played. That was one hell of a decade. Thanks for watching…

Gillan made her debut in the MCU as Nebula in the original Guardians of the Galaxy back in 2014 as an antagonist serving Ronan the Accuser. The adopted daughter of Thanos and adopted sister of Gamora, Nebula is a skilled assassin that swears revenge on her father for the suffering he has brought onto her. Eventually becoming a trusted ally in The Guardians of the Galaxy Vol. 2, she went on to appear in both Avengers: Infinity War and Avengers: Endgame. Gillan is set to reprise her role in not just Guardians 3, but also in Thor: Love and Thunder, which will release on July 8, 2022, and The Guardians of the Galaxy Holiday Special hitting Disney+ this December.

Gillan‘s recent acting credits also include her providing the voice to Nebula in the Disney+ animated series Marvel’s What If…?​​​​​​. Her other acting credits include a starring role alongside Jack Black, Dwayne Johnson, and Kevin Hart in both Jumanji: Welcome to the Jungle and Jumanji: The Next Level. Her upcoming non-MCU projects include the starring role as the titular Rhona in the upcoming Rhona Who Lives by the River, an animated musical series at Disney+. This project is currently in pre-production.