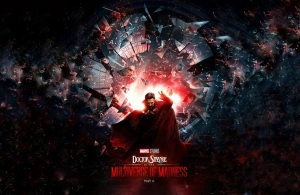 Synopsis –  Dr. Stephen Strange casts a forbidden spell that opens the door to the multiverse, including an alternate version of himself, whose threat to humanity is too great for the combined forces of Strange, Wong, and Wanda Maximoff.

My Take – I think we all can agree that every new Marvel Cinematic Universe entry comes with an accustomed set of immense hype and expectations. However, everything seemed to be on a different level for this 28th film.

Possibly because it serves as a solo sequel to the dazzling Scott Derrickson directed Doctor Strange (2016) and acts as a direct follow up to the record breaking Spider–Man: No Way Home (2021), but most prominently because it is helmed by director Sam Raimi, who is making his first Marvel Studios feature and first superhero outing since completing his pre-MCU web-slinging trilogy in 2007 with Spider-Man 3.

Who also while heading back to his Evil Dead roots, comes with a promise to deliver something darker and more violent than anything previously seen in the MCU.

Thankfully, perfectly blending horror, adventure and comic book weirdness into a visual spectacle, the film lives up to its title in all sorts of ways and is for better and for worse a Sam Raimi film through and through. Filled with mind-bending and deliciously weird moments, bonkers twists and a fistful of surprises, this Doctor Strange sequel is indeed a wild ride and possibly the MCU’s most off-the-wall entry yet.

Sure, it is an imperfect one, doesn’t always land right and feels too rushed, but at the same time it is also so unique and weird that I’d like to see the franchise evolve with this newly introduced harder tone.

Taking place sometime after the events of WandaVision (2021) and Spider–Man: No Way Home (2021), the story follows Dr. Stephen Strange (Benedict Cumberbatch), who while attending the wedding ceremony of his former lover, Christine Palmer (Rachel McAdam), finds himself saving America Chavez (Xochitl Gomez), a teenager with the ability to travel between universes, from a demon, with the help of Sorcerer Supreme Wong (Benedict Wong).

While he immediately seeks out the help of Wanda Maximoff (Elizabeth Olsen) upon recognizing the runes of witchcraft on the demon, Strange is surprised to learn that she herself is the one responsible for the breach in the multiverse.

Since acquiring the Darkhold, a collection of all evil spells, and becoming the Scarlet Witch, Wanda believes that controlling the multiverse with Chavez’s power will allow her to reunite with Billy (Julian Hilliard) and Tommy (Jett Klyne), the young sons she created during her time in Westview. Children that her fraying mind refuses to believe don’t actually exist. Refusing to surrender Chavez, Strange and the unique teenager find themselves tumbling through a kaleidoscopic series of alternate universes to stop Wanda from carrying out her potentially reality ending plans.

As one would expect, director Sam Raimi’s full range of weirdness and spookiness is on full display from start to finish here. Whether it’s through the creatures, specific cameos, or just the vibe, fans familiar with his filmography are going to be able to call out plenty of moments bearing director Raimi’s signature.

Yes, there are hardly any jump scares but the background score and the tenor perfectly bring out the terror of being chased by a monster. Demons, monsters, reanimated corpses, jump scares, doppelgangers, and supernatural manifestations fill every corner of the screen, as the film races from scene to scene with barely a breath in between.

But while it has a more grim tone than its predecessors it’s still a Marvel film at heart. Marvel fans are especially going to love all those fan-servicing, momentum-sapping cameos, but Raimi fans are going to find themselves liking the film more and more the longer it goes, because the director seems most firmly in control later on, once things get darker and darker towards the conclusion.

Reflecting its own title, the Michael Waldron written film has a frantic, on-the-edge-of-losing-control feel that sends it careening toward its next set-piece while the rest of us catch up. Sometimes the film forcefully stops for an exposition dump that’s jarring, but director Raimi’s tilting, whirling camera quickly dashes off again to the next tableau. 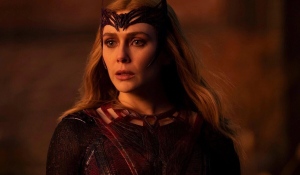 Whereas earlier MCU installments might have held back or spoon-fed their more bizarre elements, this one throws it all against the wall in often messy yet gloriously bizarre fashion. In terms of visuals, the film is on par with its 2016 predecessor. It comes to life the most during its more trippy sequences, including one show stopping plunge through a cascading series of universes that is psychedelic and strangely unnerving, with maestro Danny Elfman’s score adding a great deal to the sense of disorientation.

The performances from the principal cast are on point. Benedict Cumberbatch is, as always, effortless as Dr. Stephen Strange. He’s witty, he’s elegant, and can be vulnerable, and he manages to bring all of it in a nice balance that we love to see in our MCU characters. The Oscar-nominated actor proves once again why he is so highly-regarded. Xochitl Gomez as America Chavez makes for a good addition to the franchise. Though her part is often reduced to the role of exposition machine in the course of the film’s events, Gomez does an admirable job.

Rachel McAdams does the best with her once again under-utilized Christine Palmer. Benedict Wong is excellent, and continues to share great banter with Cumberbatch. Chiwetel Ejiofor seems to be enjoying a nice reprieve of his role, while Michael Stuhlbarg is wasted in a small role.

However, the film belongs to Elizabeth Olsen who hits hard with emotions, taking what we loved in WandaVision and adding some more layers to help flesh it out. Bringing real, palpable, heartbreaking grief to the part along with an electrifying single-mindedness. Here, Olsen takes the Scarlet Witch to new heights that makes you believe she’s one of the most powerful creatures in the MCU.

On the whole, ‘Doctor Strange in the Multiverse of Madness’ is one of the weirdest and most ambitious MCU films anchored by its stupendous cast and its perfect blend of superhero staple, horror and fantasy.