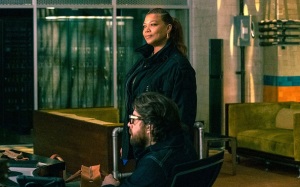 CBS has announced that the Queen Latifah starring drama series The Equalizer, currently in its sophomore season, has been renewed for Seasons 3 and 4. This renewal comes as no surprise as the series has regularly been the number one scripted series for its Sunday night time slot on the network.

The Equalizer is a reboot of the classic 80s television series of the same name created by Richard Lindheim and Michael Sloan. The original series followed Edward Woodward as Robert McCall, a retired intelligence agent who becomes a private detective. This series sees Latifah as Robyn McCall, a single mother with “a mysterious past” who uses her skills to help and protect those with nowhere to turn. Latifah’s series is also preceded by a film series reboot of the original series starring Denzel Washington.

The Equalizer premiered on February 21, 2021, and was a quick hit. The show is Sunday’s #1 scripted series, averages 9.46 million viewers each week, and to date, has amassed about “1.2 billion potential social media impressions.” The renewal will see a third season of the show airing in the 2022-2023 broadcast season.

“The Equalizer continues to pack a powerful punch on Sunday nights, and we’re thrilled to have it back for two more seasons. The success of The Equalizer is due to the sum of its parts – an outstanding cast led by the superb Queen Latifah, plus the exceptional creative team that has continued to evolve their storytelling with a compelling mix of everyday justice, family dynamics, and real-world issues that connect and resonate with audiences.”

The Equalizer is joining the list of series recently renewed by CBS, which includes all three NCIS series, CSI: Vegas, Blue Bloods, S.W.A.T., and more, with even more renewals expected to be announced in the coming weeks!

The Equalizer is currently airing its second season with the season finale scheduled for May 15.