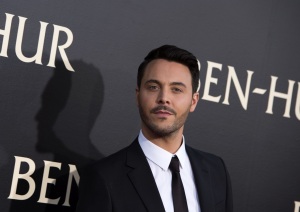 AMC‘s television adaptation of Anne Rice‘s Lives of the Mayfair Witches book trilogy has just added Boardwalk Empire actor Jack Huston to its core cast. Huston joins the already announced Alexandra Daddario (The White Lotus), Harry Hamlin (Clash of the Titans), and Tongayi Chirisa (iZombie). Esta Spalding will serve as a writer and executive producer alongside Michelle Ashford on the show. Mayfair Witches, which seems to be the upcoming show’s working title, is currently filming in New Orleans.

In Mayfair Witches, Daddario will play Dr. Rowan Fielding, a young up-and-coming neurosurgeon who realizes she is part of a family of witches. Soon, Dr. Fielding finds herself as an heir of the witches and has to deal with her newly developed powers. She will also have to face a nefarious spirit that has haunted her family for many generations. Huston will be portraying Lasher, a shape-shifting spirit who has been attached to Rowan’s family for years and has been described as “mysterious and sensual.” It has not yet been confirmed, but it seems likely that Lasher will be the nefarious spirit mentioned above. Hamlin is taking on the role of Cortland Mayfair while Chirisa will be playing a character by the name of Ciprien.

It was revealed in 2020 that the rights of two book series by Anne Rice, The Vampire Chronicles and The Lives of the Mayfair Witches, were acquired by AMC. The deal consisted of 18 titles in total. A television adaptation of Interview With the Vampire, which was previously a highly-successful 1996 film starring Tom Cruise and Brad Pitt, will also debut later this year on AMC and AMC+. Rice was initially going to serve as an executive producer on all adaptations of her work that AMC would attempt, but unfortunately, she passed away in December 2021. Her son Christopher was also set to serve as an executive producer on the adaptations of his mother’s work.

Jack Huston, who is part of the famous Huston family that includes legends like Walter Huston, John Huston, and Anjelica Huston, has appeared in many prominent roles in both film and television. Huston has appeared in the films The Twilight Saga: Eclipse, Not Fade Away, American Hustle, Ben-Hur, The Irishman, Antebellum, and most recently House of Gucci. He has also acted in the shows Mr. Mecedes, Manhunt: Deadly Games, and Fargo. Huston will next appear in the upcoming films Wash Me in the River, Hail Mary, and Unit 234, as well as the upcoming series Expats starring Nicole Kidman.

Mayfair Witches does not currently have an official release date.