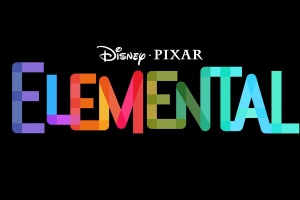 Pixar has unveiled its 27th feature film a little over a year before it’s expected to reach theaters. Elemental, which comes out on June 16, 2023, is a story based around the four elements personified and living together in a big city. Concept art from the film shows the two main characters strolling through the bustling city which has architecture inspired by the four elements. Peter Sohn (The Good Dinosaur, Partly Cloudy short) will direct the film.

Elemental will take viewers on a journey with an odd couple in Wade and Ember, a go-with-the-flow guy and a fiery woman of contrasting elements. Together, they’ll explore a city where all the four elements, earth, wind, fire, and water, live together. Along the way, they’ll realize just how much they have in common despite the apparent differences between fire and water. Early concept art show how the elements have blended together in the city, with certain buildings covered in grass and flowers and giant industrial fans sticking out in the skyline. We see Wade and Ember taking in the sights, leaving little splashes of water and bursts of fire as they walk.

The idea for the film came from Sohn and his experiences growing up in New York, albeit with the classic Pixar twist of bringing to life something that normally isn’t. “My parents emigrated from Korea in the early 1970s and built a bustling grocery store in the Bronx,” the director said in a statement. “We were among many families who ventured to a new land with hopes and dreams—all of us mixing into one big salad bowl of cultures, languages, and beautiful little neighborhoods. That’s what led me to Elemental.”

Sohn‘s idea sounds like a quintessential Pixar film, this time looking specifically at how different cultures blend together over time and how people realize the merits of other traditions. Regarding bringing the elements themselves to life, Sohn added “Our story is based on the classic elements—fire, water, land, and air. Some elements mix with each other, and some don’t. What if these elements were alive?”Joining Sohn in bringing the film itself to life is Denise Ream (The Good Dinosaur, Cars 2).

Before focus can completely turn to Elemental, Pixar has one more film on its slate for the year in the Toy Story spinoff Lightyear. Starring Chris Evans as the titular spacefarer, it tells the origin of Buzz Lightyear, following the character the toy is based on. He finds himself stuck on a planet 4.2 million lightyears from Earth alongside his commander and crew, leading to a journey to find a way back and deal with the evil Zurg in the process. The film’s not that far off, releasing on June 17.

Elemental reaches theaters on June 16, 2023. Check out the full image below: