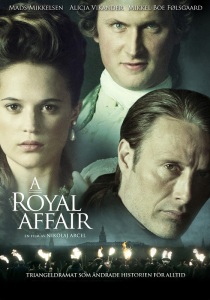 Mads Mikkelsen and Nikolaj Arcel are once again joining forces to bring the world another Danish historical drama, under the working title King’s Land. The two, who previously teamed up on A Royal Affair, will be telling a new story surrounding a famous Danish risk-taker named Ludvig Kahlen, who will be played by Mikkelsen.

King’s Land will be set in the mid-1700s and will take audiences on a journey alongside Kahlen on his quest for wealth and a reputable name. During that time, Danish King Frederick V announced that a wild and unruly part of land known as Jutland Heath would be fair game for anyone who wished to lay claim to it. The King hoped that citizens would flock there in order to begin farming and building villages, thus bringing the crown more money in taxes. However, there was one problem: the heath was known for being a dangerous and unforgiving piece of land. Not only was it a place where wolves roamed, but highwaymen patrolled the country roads, ready to brutally rob anyone who crossed their paths. Then there was Kahlen. In 1755, Kahlen, who was a Danish soldier, set course for the heath prepared to expend his blood, sweat, and tears on taming the untamable land, knowing that his journey would either bring him riches and glory or completely destroy him.

Based on the 2020 bestselling Danish book, The Captain and Ann Barbara by Ida Jessen, the feature is being written by Anders Thomas (Riders Of Justice) and Arcel. Production is eying a September 5 start date with filming taking place in Denmark, Germany, and the Czech Republic – giving the feature gorgeous backdrops for its story. King’s Land is being produced by Zentropa and is heading to the international market via TrustNordisk.

As earlier stated, Mikkelsen and Arcel worked together on A Royal Affair, a historical drama that centered around the Danish royal family. In it, Mikkelsen starred opposite Alicia Vikander and Mikkel Følsgaard in the feature which would nab nominations at that year’s Academy Awards and Golden Globe Awards for Best Foreign Language Film.

Excited about the opportunity to be working with his filmmaker friend again, Mikkelsen said of his reunion with Arcel:

Nikolaj Arcel and I had a magnificent collaboration during A Royal Affair and I am beyond excited to be working with him once again. He has an awe-inspiring vision for the film and he and Anders Thomas have penned an amazing script. Its brutality and tenderness deeply moved me when I first read it. It’s an important and fascinating chapter in Danish history about to be adapted for the screen and carrying topics still relevant to this very day.

If the last time Mikkelsen and Arcel teamed up is any indication, audiences are in for another well-crafted, historical piece that will shine its light on what it means to be human. As of right now, no official release date has been set, but stay tuned to Collider for more information.