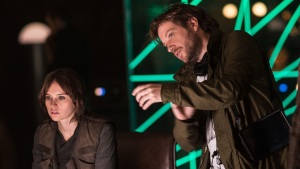 Since its announcement, hardly a word has been said about Gareth Edwards‘ upcoming sci-fi film True Love outside various casting reports. Filming has just wrapped on the project, per an Instagram post from cinematographer Oren Soffer and Greig Fraser, putting it one step closer to a grand reveal down the line. The Rogue One director’s film may still be under wraps, but we finally have some behind-the-scenes photos from the set courtesy of the pair.

There’s not much to glean from Soffer and Fraser‘s photographs of the set, but it does offer at least an inkling of the production behind True Love. Most of the pictures, courtesy of Soffer, explore some equipment used in the shoot, namely the Digital Sputnik, Astera, and Aputure lighting setups and one of the lenses from Atlas Lens Co. The cinematographers also had a picture of themselves masked up and hard at work, for what it’s worth. However, there is a nice shot of the idyllic mountains around the set which could make for a solid aesthetic for whatever the film has planned. Shooting in Thailand offers some truly stunning sights to use as a backdrop, and it’s entirely possible we’ll see the country’s beauty on full display in the film.

Edwards and company clearly still want to keep things as tight-lipped as possible, as the final photo shows a whiteboard labeled “True Love At a Glance” that’s mostly whited out. The crew seems fairly confident of the film’s quality already though. “And that’s a wrap on True Love, directed by #GarethEdwards!” Soffer said in the post. “Can’t wait for you all to see this special film we have made. Massive shout-out to our incredible Thailand and UK crews, and to our partners.”

True Love is Edwards‘ first film to follow 2016’s Rogue One and when it does eventually release, he’ll have an excellent cast working to make it something special. Gemma Chan stars in the near-future sci-fi flick alongside Allison Janney, Ken Watanabe, Ralph Ineson, John David Washington, and Sturgill Simpson among others. Edwards is producing the film with Rogue One producer Kiri Hart and the film’s financier New Regency.

Edwards has plenty of experience with sci-fi in recent memory through Monsters and Godzilla along with his aforementioned foray into the Star Wars universe. With his old cinematographer back in Fraser, Edwards seems primed to make another fun sci-fi outing, even if there’s nothing to go off of yet for a plot.

There’s much left unknown about True Love, but for now, you can check out some shots from the set on Instagram for a behind-the-scenes look at how Soffer, Fraser, and the rest of the crew brought the film to life.