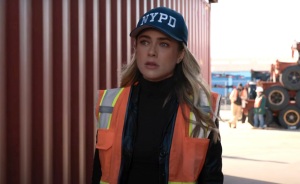 It’s been almost a year since Manifest wrapped Season 3, and fans have been thrown on a roller coaster ride. Not only because of the story, but because the series almost wrapped with an open ending after NBC canceled the show in 2021. However, Netflix is bringing the series back for one last flight that will stretch through 20 episodes, the first ten of which are coming to our screens later this year.

During this week’s Geeked Week, the streaming giant revealed a first-look clip from the new season, which was introduced by series star Josh Dallas (Once Upon a Time). The clip doesn’t give too much away, though: It follows Michaela Stone (Melissa Roxburgh) making her way through a container yard and discovering a number that is much too familiar to be a coincidence. But is it a real deal or a Calling? Either way, the answers are coming and this is just the first tease.

As there’s still a while to go until we get a look at the new episodes, it’s safe to say that a trailer dishing out what the final season of the show will cover is making its way to us in the coming months. The most important thing to address, of course, is the fate of Grace Stone (Athena Karkanis), who was stabbed to death(?) by a Flight 828 passenger who was brainwashed into joining a cult. A time jump of two years is also happening as Manifest returns, and this could hint at Grace’s death being final.

Last year, series showrunner Jeff Rake suggested in an interview to TV Insider that Grace’s death is part of the series plan, because it dramatically changes the personality of her husband Ben (Dallas). He stated:

“[It’s] the most fundamental, life-altering, devastating thing that could happen to [Ben]. A Season 4 of ‘Manifest’ for Ben is absolutely centered around processing, digesting, coming to emotional terms with such an unspeakable loss, and then trying to find a way to seek vengeance, to kind of justify the act in terms of finding some meaning out of it. “Why did this happen? Why would the Callings allow something so terrible and devastating to happen?” And of course, it’s tied into so much other complicated stuff […] So you can imagine Ben in Season 4 seeking vengeance for his wife, seeking meaning for the inexplicable, and it becomes the absolute driving force for his character.”

Even though Netflix ordered a super-sized final season for Manifest, Rake will still have to work a little miracle to wrap up all his ideas – as he told Collider, the series originally had a six-season plan that got scrapped after NBC canceled it halfway through. Netflix decided to extend the series’ run after it premiered on its catalog and quickly became one of the most-watched titles.

There is no premiere date announced for season four of Manifest. You can watch the first-look clip below: