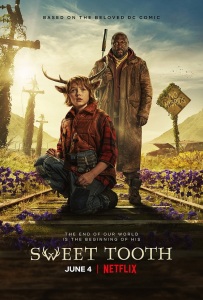 Netflix gave fans of Sweet Tooth a heartwarming surprise for Geeked Week with a new behind-the-scenes video of the cast and crew celebrating the completion of filming on Season 2. The charming apocalypse tale was renewed for a second outing back in July 2021 after rave reviews from critics and audiences along with strong viewership numbers at the streamer. While there’s no release date yet, the wrap on filming assures the second season isn’t far off.

Like the show itself, this video for Sweet Tooth opens with narration from the series’ lovely narrator James Brolin, saying “This is a story. The story of a very special group of people who found themselves at the end of filming Season 2 of Sweet Tooth.” What follows is a sweet look at the cast and crew incredibly overjoyed to have completed the second season, showing just how much they love this show.” Perhaps most enjoyable is the interaction between stars and in-universe traveling companions Christian Convery and Nonso Anozie, who hug it out after shooting. Convery also adorably interrupts Anozie calling it a wrap, jumping in front of him as he tries to speak to the audience. More than anything, the cast promises Season 2 will continue to bring the high quality of its predecessor with more stakes, danger, and massive battles to come.

Sweet Tooth adapts the work of Jeff Lemire which centers on Gus (Convery), a half-human, half-animal hybrid living in a post-apocalyptic world affected by a deadly virus known as the Sick. It’s set ten years after “The Great Crumble,” an event that marked the end of society as we know it and saw most of the population wiped out by the sick. In the wake of the disease, hybrids like Gus were born and often shunned, persecuted, and hunted down for their perceived role in the apocalypse. After Gus’s father is killed, he meets Tommy Jeppard (Anozie), aka Big Man, who protects him along his journey.

Covery, Anozie, and Brolin were joined in the series by Naledi Murray, Adeel Akhtar, Aliza Vellani, Stefania LaVie, Dania Ramirez, Neil Sandilands, and Will Forte. Jim Mickle will return as showrunner and executive producer for Season 2, though this time without his co-showrunner Beth Schwartz. Susan Downey and Robert Downey Jr. will both executive produce alongside Amanda Burrell and Linda Moran.

Sweet Tooth‘s first season was a surprising success for Netflix when it was released back in 2021. Despite drawing from another bleak apocalypse tale source material, it ended up really emphasizing the optimism in Lumire‘s original comic. It was nice to see the cast full of the same optimism on set in the Season 2 video as the story ended up conveying. Ross Bonaime reviewed the series for Collider when it first launched, saying:

Yet the transition of Sweet Tooth into more of a family-friendly fable is a good look for this sprawling tale, one that thankfully is full of hope rather than destruction. Sweet Tooth does this through an endearing adventure that shows rebirth and new chances can come out of even the worst disasters — which makes this a rare uplifting pandemic story in 2021.

It won’t be long until Gus, Big Man, and all the rest go on more adventures together now that filming is complete. For now, check out the adorable behind-the-scenes video of the cast celebrating the second season below: