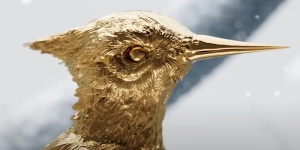 The odds were ever in our favor during the 2022 MTV Movie & TV awards. During the ceremony, an exclusive first look at the upcoming Hunger Games prequel was released. The Hunger Games: The Ballad of Songbirds and Snakes marks the fifth film installment of the franchise and is adapted from the Suzanne Collins novel that initially released in 2020.

While the teaser doesn’t reveal any footage from the film itself, it offers stunning graphics to entice Hunger Games fans. The teaser is an animated version of the book cover. Its frosty opening reveals close-up shots of tree branches, panning across part of a snake’s body while inviting viewers to return to the games. As it continues, viewers next see a close-up of a bird’s tail and feet. As the instrumental track behind it builds, the ice falls away to reveal a golden bird and snake as included title cards reveal that “the world will discover who is a songbird and who is a snake.” The teaser concludes as its different elements combine to reveal the full logo. Sharp-eared fans may also pick up on the familiar four-note motif prominent in the other movies.

The Ballad of Songbirds and Snakes focuses on Coriolanus Snow, who fans first met as President Snow, during Panem’s tenth Hunger Games, about 64 years prior to The Hunger Games. It follows Coriolanus as he prepares to mentor District 12’s female tribute, Lucy Gray Baird. Despite his initial embarrassment and disappointment, Coriolanus soon believes he and Lucy Gray may have a chance to turn the odds in their favor.

Tom Blyth (Billy the Kid) will star as the young Coriolanus Snow. He takes the reins from Donald Sutherland who played the older President Snow in the previous installments. Blyth is joined by West Side Story breakout Rachel Zegler, who plays Lucy Gray Baird. Michael Lesslie wrote the screenplay from an earlier draft by Michael Arndt adapted from Collins‘ novel. Francis Lawrence returns to the franchise as director.

“Years before he would become the tyrannical President of Panem, 18-year-old Coriolanus Snow is the last hope for his fading lineage, a once-proud family that has fallen from grace in a post-war Capitol. With the 10th annual Hunger Games fast approaching, the young Snow is alarmed when he is assigned to mentor Lucy Gray Baird, the girl tribute from impoverished District 12. But, after Lucy Gray commands all of Panem’s attention by defiantly singing during the reaping ceremony, Snow thinks he might be able to turn the odds in their favor. Uniting their instincts for showmanship and newfound political savvy, Snow and Lucy’s race against time to survive will ultimately reveal who is a songbird, and who is a snake.”

The Ballad of Songbirds and Snakes is scheduled to release in theaters on November 17, 2023. Check out the first look teaser below: