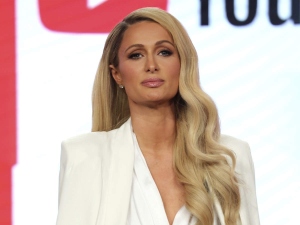 In a lineup that no one could’ve ever predicted. The ensemble cast of the upcoming Tony Kaye (American History X) directed dark-comedy, The Trainer has been announced – and boy, is it something. Deadline reports that the call sheet will include the likes of Paris Hilton, Finneas O’Connell, Lauren Sanchez, Sandra Seacat, and … Gayle King! The five new additions join the previously announced star, Vito Schnabel in the movie which was penned by Schnabel and Jeff Solomon.

The Trainer will follow the life of a fitness specialist who’s both personal life and career have seen better days. Living at his mother’s house, he decides that there has to be more to life and makes moves to chase down his idea of the American dream. There’s just one problem – he’s incredibly sleep-deprived. The film will see him forcing himself to push through his lack of shut-eye over an eight-day period, which we can presume will lead to some bad decisions and comedic situations. Schnabel and Kaye will produce alongside Jeremy Steckler (The Old Man and the Gun), with George Paaswell (The Night House) joining as executive producer.

The newest casting reveal covers quite an array of talents from television personalities to an Academy Award winner. Hilton has long been in the public eye since the premiere of her 2003 reality show, The Simple Life. Since then, she’s appeared in features including the cult classic and under celebrated Repo! The Genetic Opera, House of Wax, Zoolander, and The Bling Ring. While most recently her name has been attached to the Peacock reality series, Paris in Love, in our eyes, the DJ’s most notable work was that of her 2020 YouTube documentary, This Is Paris, in which she opens up about her life in the spotlight and the abuse she suffered as a teen. 10/10 must watch!

O’Connell is well known for his work as a singer-songwriter, record producer, and actor both solo and with his sister Billie Eilish. Over the last few years alone, he’s snagged a whopping eight Grammys and took home an Academy Award alongside Eilish for their song “No Time to Die” which was featured in the 007 movie of the same name. Most recently, O’Connell composed the music for B.J. Novak’s full length directorial debut, Vengeance. Sanchez is an Emmy-winning journalist who’s appeared in productions including The View, Larry King Live, KTTV Fox 11’s Good Day LA, and holds credits in films such as Ted 2, We Bought a Zoo, Fantastic Four, and Fight Club – just to name a few.

Seacat’s talents are currently being showcased on the FX and Hulu series, Under the Banner of Heaven. She has also appeared in Laura Dern and Mike White’s Enlightened, Sarah Adina Smith’s Buster’s Mal Heart, the Chris Messina helmed Alex of Venice, Gia Coppola’s Palo Alto, and Mark Ruffalo’s indie-drama, Sympathy for Delicious. King is known the world over for being an Emmy-nominated broadcast journalist, TV personality, and writer as well as her bestie relationship with Oprah Winfrey. Along with a slew of other credits, she currently co-hosts CBS Mornings, serves as an editor for O, The Oprah Magazine, and has appeared in features such as Queen & Slim and The Manchurian Candidate as well as shows including 30 Rock and Billions.

Although filming for The Trainer has wrapped, production has yet to announce a release date.