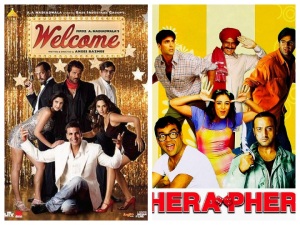 The Marvel Cinematic Universe made the idea of crossover quite mainstream. In Bollywood, Rohit Shetty was the first person to attempt it when he got the iconic character of Bajirao Singham in Ranveer Singh-starrer Simmba (2018). He took this idea further and in a grander way in Sooryavanshi (2021), in which both Singham and Simmba featured in an unforgettable climax. Yash Raj Films (YRF), too, have got tempted and are making a crossover with Salman Khan’s Tiger 3 and Shah Rukh Khan’s Pathaan, and it has already upped the buzz of the film manifold.

Last year, it came to light that producer Firoz Nadiadwala had attempted to make a crossover film almost a decade ago, with his two iconic films – Welcome and Hera Pheri. As per a report, Firoz Nadiadwala along with writer-directors Neeraj Vora and Anees Bazmee had toyed with the idea wherein Uday bhai (Nana Patekar) and Majnu bhai (Anil Kapoor) from the Welcome series kidnap Baburao Ganpatrao Apte (Paresh Rawal) of Hera Pheri franchise. Baburao’s BFFs, Raju (Akshay Kumar) and Shyam (Suniel Shetty) come to Baburao’s rescue, resulting in madness!

Bollywood Hungama spoke to Firoz Nadiadwala exclusively and asked him if he had indeed planned a Welcome–Hera Pheri crossover. To which, he said, “Yes, and I don’t want to go into details. However, for a crossover, the characters have to be like that. They should be lovable and only then does it work. Fortunately, by the blessings of our elders, we have had lovable characters in our films like Uday, Majnu, Baburao, Raju, Shyam, and also Manilal and Chota Chatri (from Awara Paagal Deewana). So, when characters from a particular film bump into the characters of another film is when the fun quotient doubles.”

So, will the Welcome-Hera Pheri crossover film be made? Firoz Nadiadwala said, “Yes, and that too in a big way. The goings-on in the narrative will be justified, with common sense and logic in place. But as I said before, you can attempt crossover only when you have the characters. Aapke paas Batman aur Superman hoga, tab jaa ke aap unhe ek saath laaoge na? If the characters are not worth it, then bringing them together and later tom-tomming about it doesn’t make sense.”