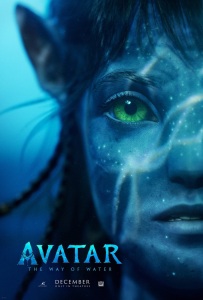 It has been 13 years since James Cameron blew our minds by taking us to the amazing world of Pandora in his career-best movie Avatar. It’s been a long long time that fans have waited for Avatar: The Way Of Water and a new image revealed by Empire Magazine shows that a significant time has passed on Pandora too as Jake and Neytiri’s kids take the center stage.

In the new image, (from left to right) we see Sigourney Weaver as adopted youngster Kiri who seems to be taking the side of Neteyam (Jamie Flatters), who it looks like is being scolded by Jake, on some distance we see Lo’ak (Britain Dalton) and we get a tiny glimpse of their youngest Tuktirey (Trinity Bliss) behind Jake.

The new image is in line with the theme set in the previously released trailer when Jake says, “Wherever we go, this family is our fortress.” Cameron, a father of five himself, explained, “I look around – I don’t want to specifically say the Marvel Universe, or the DC Universe – at current fantasy and science-fiction and all these heroes seem unbound in the mire of relationships, the stuff that pulls you down and clips your wings, that stops you running around and risking your life.” Further, elaborating on the significance of central characters having kids, he said,

I thought, “What if I take these incredible characters of Jake and Neytiri and give them a family?’ That gives them feet of clay right there.” And it’s not just Neteyam, Lo’ak, Tuk and Kiri in the mix – there’s also Spider, played by Jack Champion, a human orphan stranded on Pandora who is taken in as part of the Sully crew.

However, for actor Sam Worthington, a father of two in real life, playing a father on screen helped him discover a new side to Jake. “It’s about what you are teaching your children as they develop, and grow,” he said adding. “Jake comes from the point of view of being a Marine and leans into that way of thinking because that’s what was ingrained in him about surviving. Pacifism and militarism are definitely going to come clashing.”

Seems like ‘family as fortress’ is going to take on a completely new meaning in the war-ridden Avatar 2. Along with Worthington and Weaver, the cast includes, Zoe Saldana, Stephen Lang, Kate Winslet, Cliff Curtis, and more.

Avatar: The Way Of Water releases worldwide on 16 December. Meanwhile, check out Empire‘s image below: