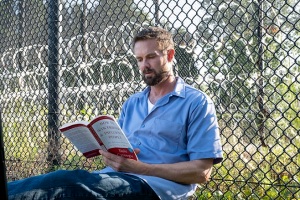 Amazon Freevee released the first trailer for Sprung, the new comedy series from My Name is Earl and Raising Hope creator Greg Garcia. The series follows a group of formerly incarcerated people who band together to use their criminal skills for good.

The trailer introduces us to Jack (Garret Dillahunt) and Rooster (Phillip Garcia), two non-violent criminals who unexpectedly get an early release from prison. Due to pandemic-related concerns, the government decided to shorten their sentences, sending them home. However, since the two men no longer have a home, they need to reach out to Rooster’s mom, Barb (Martha Plimpton). On their way to their temporary house, Bard also picks up another former prisoner, Gloria (Shakira Barrera), who’s also looking for a place to stay.

Jack is happy to finally be free after 26 long years behind bars, but he soon finds out Barb intends for him to join her crew of robbers – as Barb puts it, Jack’s criminal services would be his way to pay up for his part of the house’s expenses. While initially unwilling to join this new crew, Jack finally agrees to be a part of some more robberies if their targets would be only bad people. So, together, the four will do their best to steal some money from the biggest douchebags in the neighborhood while inadvertently forming a new found-family.

Sprung premieres its first two episodes on August 19, exclusively on Amazon Freevee. After that, new episodes come weekly to the streaming platform until the one-hour-long finale debuts on September 16. Check out the new trailer below.

Here’s the official synopsis for Sprung:

From the acclaimed comedy creator Greg Garcia (Raising Hope, My Name Is Earl), Sprung follows Jack (Garret Dillahunt), who, after being released from prison unexpectedly due to the pandemic, bands together with an unlikely group of formerly incarcerated individuals to use their criminal expertise for good.