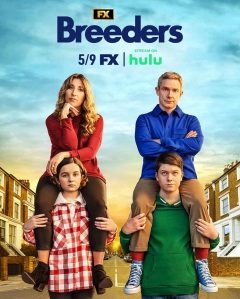 No need to fret, frustrated parents, FX has renewed Breeders for a fourth season. The series, a dark comedy that explores the complexities of modern parenthood, originally premiered on FX and Sky One in the UK in March 2020. The current season, Season 3, premiered on FX on May 9..

The series is partially based on series star Martin Freeman‘s own experiences as a parent. Freeman stars as Paul Worsley, the father of two children, and Daisy Haggard as Ally Grant, Worsley’s partner. The pair have two children together, Ava and Luke, who are often at the center of the family’s constant churn of chaos. The series was created by Simon Blackwell, Chris Addison, and Martin Freeman.

The series’ Season 4 renewal was announced by Nick Grad, President, Original Programming, FX Entertainment. In a statement made regarding the renewal, Grad said, “Breeders has given us the special opportunity to watch the ‘Worsley’ family grow with each season and FX is thrilled to order a fourth season that will bring the next chapter of this hilarious yet brutally honest take on being a parent in today’s world.” He continued, “[o]ur thanks to creators Simon Blackwell, Chris Addison and Martin Freeman, the entire creative team, Daisy and the cast, the crew and everyone at Avalon, FX Productions and Sky. Their efforts are what guide and sustain Breeders and we are happy to be part of that extended family.”

And Grad is certainly correct regarding the need for an honest depiction of modern parenting. With rising costs of childcare, the COVID-19 pandemic, and the growing culture of parental competitiveness — is your kid in a Montessori school? Do they have plastic toys? How many hours of screen time are they allowed? — being a parent has never been harder. That, combined with the tendency to present parenting in a polished state on social media has left many parents feeling inadequate. But rather than shunning the messiness inherent to parenting, Breeders revels in it. And, frankly, it is a much-needed take. Season 3 of the series followed such conflicts as Paul being punched by his son, Luke, and Ally sparring with her adolescent daughter Ava as she goes through early onset menopause.

Breeders is currently available to stream in its entirety on Hulu. The series will also soon be available on Star+ in Latin America and Disney+ under the Star banner in all other territories. Breeders is produced by Avalon and FX Productions for FX and Sky.