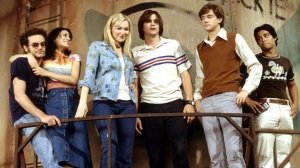 He’s back and he’s ready to flirt with everyone in Point Place, Wisconsin all over again. Recently, That ’70s Show star Wilmer Valderrama took to Twitter to show fans that he’s hard at work stepping back into his role as the beloved foreign exchange student, Fez, a part he’ll play in the series’ upcoming Netflix spinoff, That ‘90s Show.

In his tweet, the actor shared a photo of the front page of his script with the That ‘90s Show logo catching our eyes in big block letters. On the upper right hand corner, Valderrama’s name can be seen just above his character’s. In his caption, the actor wrote, “To whom it may concern… Now if I could just remember the accent,” adding an unsure and winking emoji to the end. Known for being the funny and flirty exchange student, Fez’s accent was as much of an enigma as he was, never lending itself to any specific country. Fez’s native country became a running joke throughout the series as anytime he would mention it by name, something would abruptly cut him off, keeping audiences continuously guessing.

Valderrama is one of several original cast members returning to pick up the stories that were left behind in 2006 when That ‘70s Show took its final bow. He’ll be accompanied by Topher Grace’s Eric Forman, Laura Prepon’s Donna Pinciotti, Mila Kunis’ Jackie Burkhart, and Ashton Kutcher’s Michael Kelso. Instead of the focus being on the original characters, the spinoff will follow Eric and Donna’s daughter, Leia Forman (Callie Haverda) as she spends her summer in Point Place with her grandpa Red (Kurtwood Smith) and grandmother Kitty (Debra Jo Rupp). We also know that another notable member of the cast, Tommy Chong, who played Leo, the dope smoking owner of the photo hut, will also be making his way back to the comedy. The series will be missing original members Lisa Robin Kelly and Danny Masterson, who played Eric’s spiteful sister Laurie and cool guy Steven Hyde, respectively. Tragically, Kelly passed away in 2013 and Masterson is currently awaiting trial.

With production well underway, we can’t wait to see what kind of trouble the original gang and the show’s newcomers are going to get themselves into. But most of all, will Fez finally tell us where he’s from?! Unfortunately, we’ll need to wait as there’s no set date for the arrival of That ‘90s Show.

​​​​​​​For now, check out Valderrama’s script shot and stay tuned to Collider for more information.

To whom it may concern…
Now if I could just remember the accent..
🫤😉 #Netflix pic.twitter.com/ZO9o8rgrgR