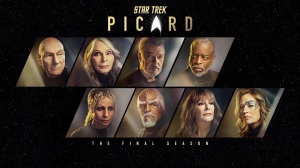 When it was announced back in April that the ensemble cast of Star Trek: The Next Generation would all be appearing in the third season of Star Trek: Picard, fans of the legacy series were overwhelmed with excitement to see the whole gang back together. Following an epic summer outing of the first season of Strange New Worlds, Paramount took the Star Trek franchise to San Diego Comic-Con for a supersized Star Trek Universe Panel. In attendance for Picard were the man himself, Patrick Stewart, and TNG actress Gates McFadden, as well as producers Alex Kurtzman and Rod Roddenberry.

During the panel, the cast and crew delivered the first official trailer for Picard Season 3, and as suspected, seeing the TNG crew back together is sure to bring tears to the eyes of fans of both series. In the new trailer, fans got to see, and hear, a glimpse of the returning cast members.

Both previous seasons of Picard also saw the return of several characters from TNG including now-retired parents Will Riker (Jonathan Frakes) and Deanna Troi (Marina Sirtis), and the android Data (Brent Spiner) in Season 1 and delightful appearances from Q (John de Lancie) and Guinan (Whoopi Goldberg) in Season 2. Season 3 of Picard marks the first time that Stewart, McFadden, Frakes, Sirtis, Spiner, LeVar Burton, and Michael Dorn have all shared the screen since 2003’s Star Trek: Nemesis. Spiner has appeared in every season of Picard, however as Season 1 centered around Data’s wish to pass on, it’s not clear yet exactly who he’ll be playing in Season 3. Perhaps another relative of the incomparable Dr. Soong.

Star Trek: Picard will also feature Jeri Ryan as Seven of Nine (also a legacy character from Star Trek: Voyager) and Michelle Hurd as Raffi Musiker. The previous two seasons featured Alison Pill, Santiago Cabrera, Isa Briones, and Evan Evagora who all departed following Season 2 and the announcement of the returning TNG cast members. Each season of Star Trek: Picard plays a bit like an anthology installment in the overall series, and it looks like Season 3 will be a thrilling final chapter.

The first two seasons of Star Trek: Picard are available right now on Paramount+. Season 3 will arrive in 2023. You can watch the teaser for the final season down below: