Synopsis – Hank, a loveable dog with a head full of dreams about becoming a samurai, sets off in search of his destiny.

My Take – While the animated world continues to be dominated by Minions and everything Disney, at first glance this new Nickelodeon-branded animated film looked like a direct-to-video rip-off of Zootopia (2016) and Kung Fu Panda (2008). It was surprising that the film even played in theaters at all.

Originally titled ‘Blazing Samurai’, this much delayed animated comic adventure from directors Rob Minkoff (Mr. Peabody & Sherman) and Mark Koetsier is technically a remake of Mel Brooks‘ 1974 Western comedy ‘Blazing Saddles’, and also has the comedy legend as one of the voice talents attached. But while the title has been changed, Brooks’ spirit remains. Resulting in a very funny self-aware film that knows what is and comes with a surprising barrage of excellent jokes.

The visual gags are just as hilarious as the spoken ones. Relentlessly committed to the bit, for all intents and purposes, this is a film that emulates Brooks‘ style, tone, and gags while also referencing Brooks‘ own filmography. Making it the closest thing to an actual Mel Brooks film we can get, after all these years.

Yes, though it does feel a little too derivative at times especially due to its predictable story line, yet, the film works as a harmless piece of entertainment that delivers everything it promised. 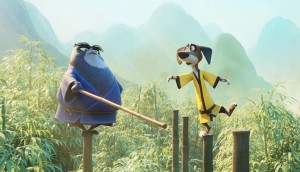 Set in a Japanese feline land, the story follows Hank (voiced by Michael Cera), a bullied and hapless dog who wants nothing more than to become a samurai, even though that honor is always bestowed upon cats and for his actions by entering their land finds himself imprisoned. However, an opportunity presents itself in the form of Ika Chu (voiced by Ricky Gervais), a villainous high-ranking official, who wants to wipe off the impoverished village of Kakamucho, to impress the visiting shogun Toshi (voiced by Mel Brooks) with his perfect palace.

His big idea is to send bandits to chase the villagers away and use a giant jade toilet to wash the place out. And when their originally stated samurai flees to save himself from invading thugs, Ika Chu sends in Hank as his appointed replacement to defend an all-cat village, convinced that they will kill him, giving him a legal reason to uproot the village. But while Hank meets a very hostile crowd upon arrival, he finds himself under the training of Jimbo (voiced by Samuel L Jackson), a cat-nip addict former samurai, who not only helps Hanks in turning things around, but also prepares him for the dangers to come.

What appeared to be simply a rip-off of Kung Fu Panda with dogs and samurai instead of pandas warriors surprisingly ends being a fun adventure that stands on its own thanks to its well-written screenplay and a great sense of humor. For parents hoping this won’t drag too long, the pace is fun and keeps up with some of the other elements it exploits to really maximize their inclusion into the film.

Beyond the self-aware nature of the film, there are many surprisingly funny jokes with deceptively sharp writing that made me laugh loud. The comedy pops in this film in a way that not every animated film can pull off, and part of this boils down to how this project was realized. The film has a lot of jokes, and I mean a lot of jokes, crammed into a short amount of time.

Jokes vary from Ika Chu being mistakenly called Pikachu and horses having GPS or Giddy-up Positioning System to attempts at breaking the fourth wall and self-referential humor, as well as a nod to other pop culture media, make things more spontaneous. 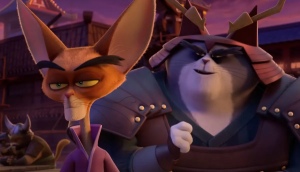 There is something welcoming about the way the film links together puns, sight gags, one-liners, and self-referential spoofs. Even if some of them reduce themselves to fart humor, slapstick, catch phrases, recurring jokes, and adult humor masked in the dialogue. Yet, the sheer volume of the comedy becomes impressive, particularly in the film’s opening and closing stretches.

The film also contains the all too familiar message about how everyone deserves the chance to be successful irrespective of how they look and everyone should be treated fairly. For example, even though Hank is a dog, he still deserves to be taken seriously as he attempts to become a samurai. The animation too is decent, especially when Jimbo goes into a flashback about how he ended up as a washed-up overweight recluse and the martial arts sequences.

Sure, the film is flawed and contains certain segments that are neither particularly subtle nor particularly insightful, and it’s made murkier via a Japanese-inflected setting that (presumably unintentionally) adds a racial wrinkle back into a film that has carefully excised its predecessor’s boldest element. Nevertheless, the film’s bizarre existence and inspired goofiness allows it to eke out a soft victory in the crowded realm of derivative animation.

Voice performance wise, Michael Cera and Samuel L. Jackson are excellent as the two leads, who crank up their celebrity personas to the max as this mismatched duo. Ricky Gervais as the antagonist, Ika Chu, stands out with his snarky tone and arrogance. He makes the villain Ika Chu as sassy, conniving, and ridiculous as you would expect and it works so well for this film that I could not help but love what he was able to do with the role. Mel Brooks is delightful as always. In other roles, George Takei, Gabriel Iglesias, Djimon Hounsou, Aasif Mandvi, Kylie Kuioka, Cathy Shim and Michelle Yeoh do their jobs well. On the whole, ‘Paws of Fury: The Legend of Hank’ is a short, breezy animated flick that delivers some of the loudest laughs of the year.