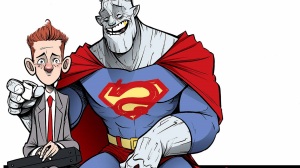 The tremor from the recent Warner Bros Discovery shake-up is yet to subsidem as the fate of more DC shows is being made public by the day. It has now come to light that yet another DC-related project, Strange Adventures, will not be seeing the light of day. However, unlike other projects that have recently faced a similar fate, the cancellation of Strange Adventures had little to do with the new strategic shift announced by executives at Warner Bros.

Unlike Batgirl, which was well past the production stage and was ready to fly off onto HBO Max, Strange Adventures never made it past production before the axe came down on it. Filmmaker Kevin Smith, who was aboard the production team of Strange Adventures to pen episodes for what was to be an anthology series, revealed on his podcast Hollywood Babble-On that the show was canceled long ago, before WBD‘s announcement of a strategic change of plans. Discussing the aftermath of Batgirl‘s cancellation, Smith detailed the circumstances that led to the cancellation of Strange Adventures saying that it “kind of made sense to me.” Smith revealed that he was working alongside his frequent creative partner, Eric Carrasco, writing the script for an episode of the show when Carrasco informed him that production had been shelved for the series.

Sharing the content of his script with Carrasco, Smith revealed that the show was aimed at bringing less popular DC heroes to the fore, with his own focus being Bizarro and the addition of Jimmy Olsen and Perry White. Smith also revealed how he had planned to have Nicolas Cage play the role of Bizarro, but never got to seal the deal with him. Projected spending for each episode of Strange Adventures was $16-$20M per episode, which Smith said was understandably expensive given the less popular nature of the comic characters. “Nobody necessarily knows these characters, and it sounded like an expensive show,” Smith shared on the podcast.

Smith and podcast co-host Ralph Garman insinuated that a similar fate would meet the Green Lantern series, which was one of the two Berlanti Productions projects (the other being Strange Adventures) that were originally green-lighted. On the contrary, it has now been revealed that production will continue for Green Lantern.

On an earlier episode of his Hollywood Babble-On podcast, Smith criticized Warner Bros Discovery‘s decision to cancel Batgirl calling it a “baffling decision” that will be demoralizing for Batgirl‘s directors Bilall Fallah and Adil El Arbi whose careers had been on the rise following their direction of Bad Boys for Life (2020) as well as two highly rated episodes of Disney+‘s Ms. Marvel.