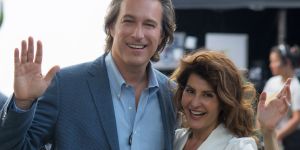 Do we hear wedding bells? W#e must because My Big Fat Greek Wedding 3 has officially wrapped filming. The announcement was made by Nia Vardalos who writes and stars in the film. The first film, My Big Fat Greek Wedding was a brilliant success upon its release in 2002. The film which was loosely based on the experiences of the writer herself would go on to become the highest-grossing romantic comedy ever.

In celebration of the end of filming, Vardalos made use of the social media platform, Twitter to share the news of the wrap. She uploaded a photo of herself and other members of the team who all seemed in high spirits with a caption: “Drinks (and beer poured on us) when we wrapped principal photography! I write alone, then met hundreds of people. I directed this film in my usual calm and methodical manner. Inside, I wept tears of gratitude. With love, from Greece.”

The original My Big Fat Greek Wedding directed by Joel Zwick, tells the story of Fotoula “Toula” Portokalos played by Vardalos, a young Greek-American woman who falls in love with Ian Miller, a non-Greek man played by John Corbett. Against the wishes of her parents, Toula agrees to marry him and the two are saddled with the challenge of getting her family to accept him while being true to her roots and preparing for their upcoming wedding. Produced with a $5 million budget, My Big Fat Greek Wedding went on to gross a very impressive $368.7 million at the box office.

Asides from being a hit financially, the first installment of the franchise earned Vardalos a nomination for Best Original Screenplay at the 2003 Academy Awards. This is an impressive feat especially when considering it was her screenplay debut. That success would inspire other projects such as the 2016 sequel, My Big Fat Greek Wedding 2 as well as TV series My Big Fat Greek Life, which only ran for 7 episodes.

Plot details for the third run in the franchise have been kept under wraps for now but there are some familiar faces set to return. In a separate post on Instagram, Vardalos shared an image that confirmed the return of much of the original cast for the third run including Corbett, Gia Carides, Joey Fatone, Louis Mandylor, and Andrea Martin. Michael Constantine who plays Gus, Vardalos’ father in the film sadly passed away in 2021 and would not be part of the film. Now that filming is wrapped, we expect to hear more from Vardalos soon.

Check out Vardalos’ posts on Twitter below, and check out the trailer for the first film, which celebrates its 20th anniversary this year:

Drinks (and beer poured on us) when we wrapped principal photography! I write alone, then met hundreds of people. I directed this film in my usual calm and methodical manner. Inside, I wept tears of gratitude. With love, from Greece. #mybigfatgreekwedding3 #greece pic.twitter.com/rU0fclZ68y