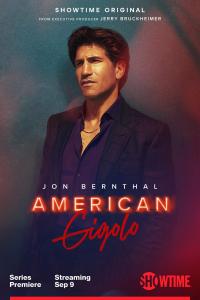 If you weren’t already excited about the premiere of Showtime’s American Gigolo series next month, the service is here to make sure you are with a new trailer. Led by Jon Bernthal in the role originated by Richard Gere in the 1980 film of the same name, the new footage is pulse-pounding and exciting – for more reasons than one.

Replacing the sound of Blondie’s iconic “Call Me” for a more intense soundtrack, the new trailer explores Julian Kaye’s (Bernthal) life as a newly-free man, a former sex worker just out of prison for serving a sentence over a crime he didn’t commit. With no place to go and no direction, Julian is quickly caught up in not only trying to resume the work he was doing prior to his arrest, but also in the aftershocks of his release, with a mysterious someone out to get him. As Julian puts it in the trailer, whatever mess he was pulled into “isn’t over.”

The new trailer leans into more of the violence audiences should expect to see in the series, predicated on Julian’s relationship (former or otherwise) with Michelle (Gretchen Mol), with whom he had a relationship before being sent to prison for fifteen years. Now a free man, Julian must figure out how to survive in a world he is wholly unfamiliar with, a world that is thoroughly out to get him for a crime he did not commit, and he has nowhere to go, nowhere to hide.

Fans are, of course, also treated to Bernthal’s sheer charisma as a leading man, and it seems like Showtime knows what they’ve got, tagging the video posted to their Twitter with, “Come for Jon Bernthal. Stay for Julian Kaye.” The company seems to be leaning as hard into the more intimate aspects of the show as they are the thrilling aspects of it — and for good reason — tweeting out weekly snippets of Julian’s softer dialogue in order to hype fans for the premiere in September.

American Gigolo serves as a direct sequel to the 1980 film starring Gere, one of a number of sequel series Showtime has put out this year, notably also including The Man Who Fell to Earth, a sequel to the David Bowie movie of the same name. The series is produced by Jerry Bruckheimer, and also stars Rosie O’Donnell, Wayne Brady, and Leland Orser.

American Gigolo premieres on Showtime on September 9. Check out the new trailer below: