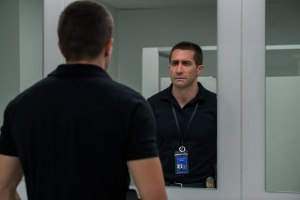 The reimagined take on 1989 cult classic Road House led by Jake Gyllenhaal has begun production, Prime Video revealed in a new tweet. The streamer shared a picture of Gyllenhaal and director Doug Liman smiling ear to ear from the first day on the set the clapboard can be seen in the latter’s hands.

In the reboot currently filming in the Dominican Republic, Gyllenhaal plays a former UFC fighter who takes a job as a bouncer at a rough-and-tumble roadhouse in the Florida Keys. However, he soon discovers that everything is not as it seems in this tropical paradise. Along with Gyllenhaal the movie also features, Billy Magnussen, Lukas Gage, Hannah Love Lanier, Gbemisola Ikumelo, Daniela Melchior, and more. Road House will also mark the feature film debut of UFC champion Conor McGregor.

The original drama starred Patrick Swayze and Kelly Lynch in lead roles as James Dalton and his love interest Dr. Elizabeth “Doc” Clay while Sam Elliott plays Wade Garrett, a mentor and friend for Dalton. The movie sees Dalton as a professional ‘cooler’ with a mysterious past who is employed by owner of Double Deuce club in Missouri to take over the security and clean the club. Upon Dalton getting control of the place, he fires many employees for theft and drug dealing and in turn makes enemy with local business magnate Brad Wesley (Ben Gazzara). Things start taking a downward shift when Wesley reveals he knows about Dalton’s past and pressurize him into joining forces.

In its time the movie saw a modest box office success, however, later became a cult classic action movie. In 2003, an off-Broadway musical production of Road House was staged, and a sequel titled Road House 2, was released directly to DVD in July 2006. The movie also inspired a mini comic run by Julia Gfrörer, Sean T. Collins, and Gretchen Felker-Martin titled All Fuc***-Up: Tales from the Roadhouse (2020).

Producer of the original flick Joel Silver is also back on board to produce the reboot. JJ Hook, Alison Winter, and Aaron Auch are all set to serve as executive producers. BAFTA and Golden Globes nominated Gyllenhaal has features like Nightcrawler, Broke Back Mountain, and more to his credits. His upcoming features include the miniseries Lake Success, Snow Blind, Prophet, and more. Liman is well known for features like Edge of Tomorrow, and The Bourne Identity, among others.

No release date for Road House has been revealed yet.