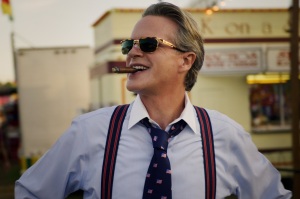 The rise and fall of the world’s first smartphone is coming to the big screen in BlackBerry. The upcoming movie, which will star Jay Baruchel and Glenn Howerton, is adapted from the non-fiction best-seller Losing the Signal: The Untold Story Behind the Extraordinary Rise and Spectacular Fall of BlackBerry, written by Globe & Mail reporters Jacquie McNish and Sean Silcoff.

Blackberry is directed by Matt Johnson (Operation Avalanche, Nirvanna the Band the Show) who also co-stars in the project. The film follows a string of high-profile projects chronicling the tech industry’s most hubristic stories, including The Dropout and WeCrashed.

The upcoming filming will mine its story from a quietly fascinating chapter in tech history. Based in Waterloo, Ontario, Canada, Research in Motion Inc. became world-renowned for their BlackBerry smartphones, the first such device to gain a foothold in the market. Co-CEOs Mike Lazaridis and Jim Balsillie, whose stories will likely feature prominently in the film, were two of the most celebrated businessmen in Canada, and the Waterloo region became Canada’s answer to Silicon Valley. With the distinct black buttons that gave them their name, BlackBerry phones were, for a time, ubiquitous in the early years of the 21st century, popular among businessmen and government officials; even then-President Barack Obama was a fan of the device. The introduction of the Apple iPhone in 2007 turned out to be the death knell for BlackBerry; thanks to a multi-year head start, the BlackBerry held its own against the iPhone for several years, but the Apple device and other competitors soon outpaced it, as the company became ensnared in multiple legal disputes. Research in Motion, now renamed BlackBerry, no longer manufactures any hardware, including its signature smartphone; it now produces cybersecurity software. The company ended support for the BlackBerry phones earlier this year. It will be interesting to see how much of this story BlackBerry will illuminate.

BlackBerry will be introduced to buyers at this fall’s Toronto International Film Festival.