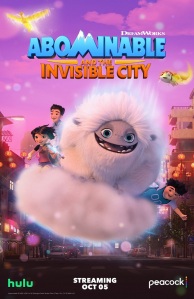 DreamWorks Animation has released the full trailer for Abominable and The Invisible City, a spinoff series of the 2019’s hit animated movie Abominable. The series expands on the film’s original story by bringing other mythical creatures to join Everest, the yeti.

Abominable follows Yi, a young violin player who one day finds a Yeti on the rooftops of her apartment building. After naming the yeti Everest, Yi (voiced by Chloe Bennet) embarks on a journey to the far corners of China to take the creature back home. Meanwhile, they are chased by the unscrupulous billionaire Burnish (voiced by Eddie Izzard), who dreams about capturing a yeti. At the end of the film, Burnish has a change of heart and agrees to help Yi to keep the yeti’s existence a secret from the whole world. Abominable and The Invisible City will expand the universe as Burnish (voiced by Alan Cumming in the series) and Yi join forces to save other magical creatures endangered by human greed.

The new trailer has plenty of folk creatures, as Abominable and The Invisible City promise to keep exploring Oriental legends and bringing them to life. We see magical flying carp, dragons, a phoenix, and an armadillo-like monster who loves to lick people. Everest is also back, as he joins Yi in her quest to save mystical beings, and each of the ten episodes of the first season of Abominable and The Invisible City will show just how many creatures are hiding in plain sight in the human world. The trailer also confirms Tenzing Trainor is returning to voice Jin, one of Yi’s friend who joined her adventure in the original movie. Peng is also back, although DreamWorks didn’t confirm if Albert Tsai would reprise his role.

Abominable and The Invisible City comes to Hulu and Peacock on October 5. Check out the new trailer and the series synopsis below.

Abominable and The Invisible City is a comedy adventure series that continues the wild and wooly fun of DreamWorks Animation’s Abominable. Through Everest the yeti, Yi, Jin, and Peng know that there’s a whole magical world out there, and now it’s even closer than they think! When they discover that their surroundings are teeming with magical creatures in need of their help, the kids will set out on extraordinary and heartfelt adventures throughout their city and beyond.