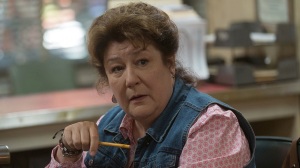 Accused is based on the BAFTA-winning crime anthology of the same name from BBC and showcases the perspective of various defendants as they tell their side of the story of how they ended up in court. From the outset, the audience has no idea why the person stands accused in court until they unfold how they ended up involved in the crime. Each story aims to depict how an ordinary person winding up in the wrong place at the wrong time can change everything. In total, 15 episodes of the series are coming to explore different criminal scenarios.

Martindale and Parker will star alongside each other for the first time since appearing in the Emmy-nominated Iron Jawed Angels together in 2004. Little is known about their episode other than that it will tackle conspiracy theories. Bilson, meanwhile, will team up with Davenport, Miller, and Maturo for a story about a family going through dire straits. Ghee, whose last major on-screen appearance came in Raising Dion in 2019, will lead the episode directed by Billy Porter which follows a drag queen’s fateful affair that ends with dire consequences. Finally, Dale is set to appear in an episode about a brother who looks out for and protects his sibling whose involvement in a car accident as a child changed their life forever.

A few additions were also made behind the camera. Reservation Dogs writer and director Tazbah Rose Chavez will fittingly helm an episode about a uranium mine that’s been ruining Native American lands for decades and the activists that rise up to protest its continued operation. Brad Turner will also be rejoining his old 24 colleagues, series creator Howard Gordon and Alex Gansas, as an episode director alongside Jonathan Mostow (Terminator 3: Rise of the Machines), and Lee Rose (Star Trek: Discovery) who are also slated to tackle their own episodes, though it’s unknown at this point what stories they will be helming. They join a host of other creatives toplining each episode, including Marlee Matlin, Michael Chiklis, Michael Cuesta, Julie Hebert, Clark Johnson, and Michael Offer.

Accused is currently slated for a January 2023 release.