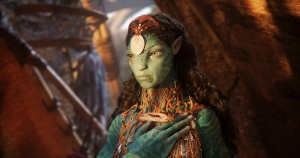 James Cameron announced at the D23 Expo that Avatar 4 had begun production. Cameron joined the Expo virtually from New Zealand to give updates on all the upcoming Avatar sequels.

While giving the update on Avatar 4, Cameron also updated Expo attendees on Avatar 3, saying filming was continuing. He also hinted that while Avatar 2 is still in post-production, it’s “going well,” and the material from Weta looked “spectacular.” Cameron added, “I’m super excited to be finally finishing up movie two. I know everyone’s been waiting a long time. Hopefully, we’ll show something today, and you can decide if it’s been worth it.”

After the sequel updates, he screened 3D scenes from Avatar 2 showcasing the lush and beautiful world of the creatures known as the Na’vi. The footage showed the Na’vi swimming on the world of Pandora and watching a video of Sigourney Weaver’s Dr. Grace Augustine. It also showed combat in the woods of Pandora, a conversation and argument between Zoe Saldana and Sam Worthington’s characters, and more strife between the Na’vi. Saldana and Worthington‘s characters are parents in the film, which goes with the movie’s theme of “protecting family,” Worthington said on the Expo stage. “We’ve realized that love and being with family is paramount to what life is, and it’s worth fighting for.”

The first Avatar film long held the record for the highest-grossing movie of all time, with Cameron supplanting his own film, Titanic. Avatar is set in the 22nd century, around 2154 when Earth’s natural resources were depleted. Because of this, humans colonize Pandora, a moon of a gas-giant planet, to mine Unobtainium, a valuable mineral. This mining and colony expansion threatens the Na’vi, a tribe of humanoid creatures native to the moon. A marine remotely operates a genetically engineered Na’vi body and uses this body to interact with the Pandora natives. Along the way, he learns appreciation for the Na’vi and falls in love with a member of the tribe.

Avatar 4’s release date tentatively set for December 18, 2026. The first film will release again in theaters in a remastered version set to screen ahead of the upcoming second film (that will be released on December 16, 2022), but if you want to catch up on Avatar before its re-release, it is available for rent and purchase on Amazon Prime Video.