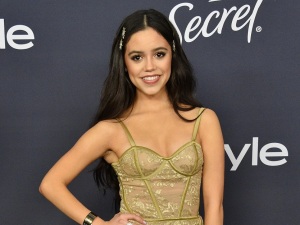 Jenna Ortega has joined the cast of the upcoming film Miller’s Girl from Lionsgate and Point Grey alongside Martin Freeman, according to Deadline. The film will be based on a screenplay by Jade Halley Bartlett, which was ranked on the 2016 Black List. The film will also serve as Bartlett‘s directorial debut, alongside penning the script.

While little information about the film’s plot details has been revealed, Miller’s Girl will focus on a teacher and his student as he assigns a creative writing assignment that leads to complex results. While Deadline did not report what roles Ortega and Freeman will play in the film, with the two actors attached as the leads, the two will likely play the student and teacher, respectively, in the upcoming movie, which is currently in production in Georgia.

“While we are excited for the movie to speak for itself, the level of talent assembled for this special film is a testament to Jade, whose screenplay lures you in with her dazzling voice. And then eats you alive,” said Erin Westerman, President of Production for the Lionsgate Motion Picture Group, to Deadline about the upcoming project.

Alongside starring in Miller’s Girl, Ortega is also set to star in the upcoming Addams Family spinoff show, Wednesday, directed by Tim Burton, which will be released on Netflix with eight episodes. She is also set to reprise her role as Tara Carpenter in the untitled sixth installment of the scream franchise after starring in Scream earlier this year. She will also star alongside Tommy Lee Jones and Ben Foster in Finestkind, an upcoming crime thriller set to be released on Paramount+.

Well known for his roles as Bilbo Baggins in The Hobbit trilogy and John Watson in Sherlock, Freeman is set to star in the upcoming Marvel Studios film Black Panther: Wakanda Forever, where he will be returning as Everett K. Ross. Freeman will also return to the role in Secret Invasion, an upcoming Marvel Studios series that will debut on Disney+ in early 2023.

Mary-Margaret Kunze serves as a producer of Miller’s Girl, with Josh Fagen of Point Grey overseeing the project alongside Chelsea Kujawa and Scott O’Brien of Lionsgate. With the film still in production, no official release date for Miller’s Girl has been set yet.