Lila Neugebauer‘s directorial debut Causeway chronicles the struggles of one US soldier’s readjustment into civilian society after suffering a traumatic brain injury in Afghanistan. The drama premiered at the 2022 Toronto International Film Festival, and explores themes like depression and anxiety, and learning to heal from and cope with trauma. Ahead of its theatrical release, and premiere on Apple TV+ on November 4, brand-new images, unveiled by Discussing Film, show Oscar-winner Jennifer Lawrence alongside co-star and Emmy-nominee Brian Tyree Henry as they explore their own physical and psychological wounds.

In Causeway, Lawrence plays Lynsey, a US solider who’s recently returned to her hometown of New Orleans after suffering head trauma while on duty in Afghanistan. Previously in the US Army Corps of Engineers, Lynsey finds herself returning from war to yet another battle – facing her negligent mother and her past demons. Rendered incapable of functioning 100% on her own from the brain injury, Lynsey finds herself in a dark place during her rehabilitation, and sets her sights on returning to the army. When she meets James (Tyree Henry), the two unwittingly bond over their past and their traumas. Through their friendship, Causeway seems to show it’s easier to have compassion for someone else’s struggles than your own, but that through each other they can learn and grow from that.

The new images highlight some of the film’s beauty captured by cinematographer Diego García (Wildlife). We see glimpses of Causeway‘s setting in New Orleans, a factor that plays heavily in the narrative of the story. It’s the return to this city, and to her mother, that drives Lawrence’s character to return to the dangerous, yet organized life of the army. The images also show us a fraught Henry in a bar, likely immersed in an intimate moment with Lynsey. The photos give nothing away, but they show the relationship between the two main characters, as well as a tense moment between director Neugebauer and Lawrence.

Two-time Emmy nominated Henry is best known for his starring role as Alfred ‘Paper Boi’ Miles in Donald Glover’s Hulu series Atlanta. After a number of smaller roles for hit series like Boardwalk Empire, How to Get Away with Murder and This Is Us, Henry has shown some serious acting chops as his career has grown. Most recently, he’s broken into major roles in feature films as Phastos in the MCU’s Eternals and Lemon in David Leitch’s Bullet Train, opposite Brad Pitt.

The screenplay for Causeway is written by novelist Ottessa Moshfegh, Luke Goebel, and Elizabeth Sanders. Director Neugebauer also serves as an executive producer with Lawrence’s Excellent Cadaver, as well as IAC Films and A24.

Causeway will be in theaters and on Apple TV+ on November 4. You can see the Discussing Film‘s images below: 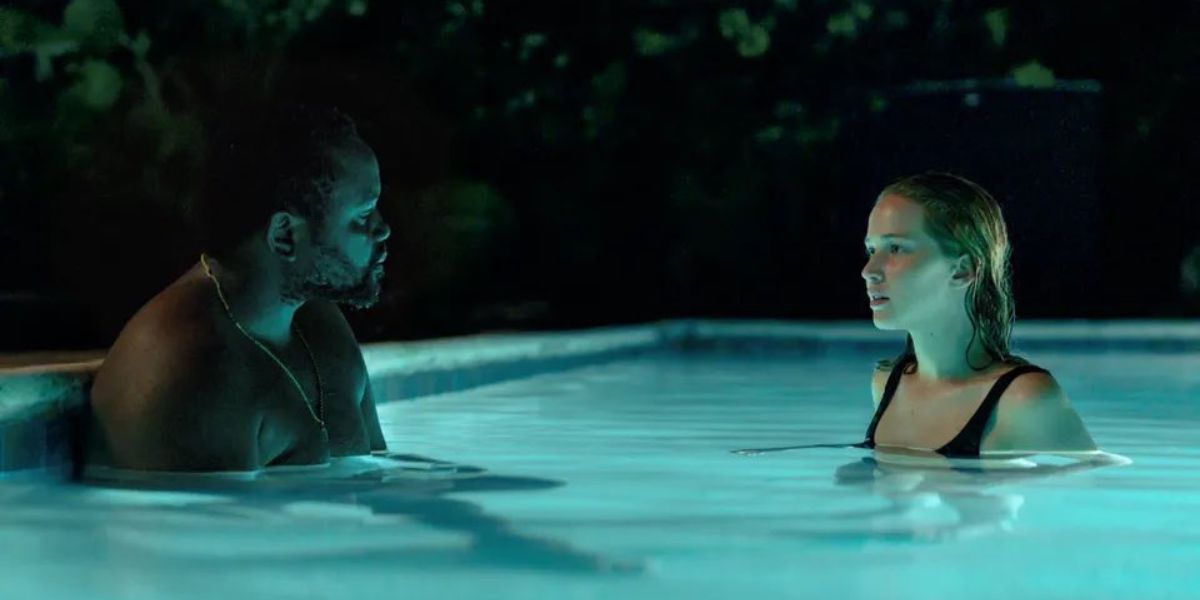