Synopsis – A divorced couple that teams up and travels to Bali to stop their daughter from making the same mistake they think they made 25 years ago.

My Take – With this year’s Marry Me, starring Jennifer Lopez and Owen Wilson, and The Lost City, starring Sandra Bullock and Channing Tatum, finding appreciation from the audience and raking up unexpected numbers at the box office, it seems like ‘stars’ lead romantic comedies are making a comeback to dominate the big screens once again like they used to until a decade ago.

Joining this resurgence, is the latest from director Ol Parker (Mamma Mia! Here We Go Again, The Best Exotic Marigold Hotel), who co-wrote the film with Daniel Pipski, which reunites on-screen possibly the two most likeable movie stars on the planet and real life close friends, George Clooney and Julia Roberts, for the first time since 2016’s Money Monster.

And with their old style movie type glamour and charm at disposal, the result is exactly the kind of film you’d expect – an amiable enough good old-fashioned romantic comedy with a charming cast, a somewhat indifferent script, and a gorgeous location to take in. It’s exactly the kind of light film no one makes anymore.

Simply told, it’s failing are equally its strengths – being incredibly predictable, utterly unbelievable, and follows a rigid structure that has very few surprises in its narrative, yet it works decently as a nice reminder as to why this formula works so well when done right, especially in the hands of two perfectly matched on-screen legends. Making this one a delight for anyone who loves this kind of films.

The story follows David (George Clooney), a prosperous middle aged man and Georgia (Julia Roberts), a high-flying art dealer, who were once college sweethearts but got married way too early and split unhappily after the birth of their only child, Lily (Kaitlyn Dever). Even after all these years, the duo hate interacting with each other, and come together only for events which require them to be present for their daughter, who has learned to suffer her parents’ undignified outbursts and immature tantrums with each other.

However, the two are horrified to receive a wedding invitation from Lily, who after graduating with her best friend Wren (Billie Lourd) left for a much-deserved holiday to Bali, but ended up accepting a marriage proposal from Gede (Maxime Bouttier), a local seaweed farmer, following a a whirlwind romance. Determined not to let their daughter throw away a promising career and her life in the States, the parents take off to Bali and grudgingly agree to set aside their differences on a secret mission to sabotage this hasty marriage and save Lily from the same mistake they made twenty-five years ago.

With such a classic setup, we all know where the film is going, but this kind of thing still has to walk a thin line: it needs enough realism for us to buy into the story, but not too much to spoil the fantasy. Director Parker manages a surprisingly effective balancing act through most of the film, right up through a note-perfect final freeze frame.

His job is to simply paint around the two, in bright but soothing shades and cast the film in the same mold as his earlier film’s feel good territory. Everything about the film feels like it could have been produced ten years, twenty years ago, or even thirty years ago when Roberts and Clooney used to star in such kind of films on a regular basis, especially Roberts.

Of course, the film presents Bali as a postcard-ready fantasy and the seaside locations look gorgeous throughout. It’s also pleasing to see that despite some questionable ‘foreigner abroad’ gags, the film does showcase Indonesian culture with filmmakers working with cultural advisors to ensure its authenticity. The locals including Maxime Bouttier‘s Gede and his family members are a key to the story. The destination of the story might be inevitable, but at least there’s some freshness to the scenes as a result. 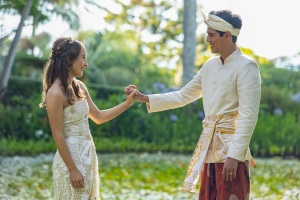 Though there’s nothing that’s particularly wrong with the film, but it quickly becomes apparent that there’s nothing particularly memorable about it either. It’s the type of rom-com where you know exactly how it’ll end as soon as the first act set-up is out of the way.

Most surprisingly, unlike what the promotional material wants you to believe, the comedy bit is kept to a minimum. While the snarky exchanges between the lead pair is the heart of the film, the script is far more sentimental than it is humorous as it’s rooted in a parent’s fear that their children are such perfect models of themselves that they’re bound to repeat the same mistakes. David, at one point, confesses that he’s at his most vulnerable in the highs of his daughter’s life because he doesn’t want things to change.

As a result, their efforts to break up the lovebirds seem boringly and halfhearted, with scenarios that call for a cunning, over-complicated scheme end up somehow emphasizing the former couples’ compatibility. It’s familiar territory, and as an audience we are left a little raw by how blandly straightforward their romance is, despite it supposedly providing the film’s central propulsion.

However, the one aspect that absolutely does work though is the lead pairing of George Clooney and Julia Roberts, who still have the same chemistry that you might remember from Ocean’s Series. Even if the flat script doesn’t really give them much more to do than bicker, their charisma and chemistry does all the heavy lifting.

Though, Kaitlyn Dever has well proven what she can do with a properly funny script, she is decent enough to make her character believable. Maxime Bouttier too does well to make the sudden relationship feel genuine. Billie Lourd as Lily’s best friend Wren and Lucas Bravo as Georgia’s naive boyfriend Paul deliver fun supporting turns. On the whole, ‘Ticket to Paradise’ is a decent old-school escapist romantic comedy that will resonate with fans of the genre.