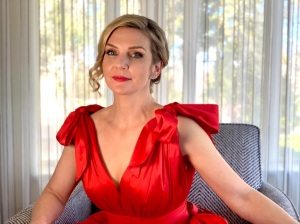 Vince Gilligan‘s new — and currently untitled — series has landed a two-season order with streaming giant Apple TV+. Gilligan is the creative genius behind AMC‘s record-breaking Breaking Bad and spin-off show Better Call Saul. The project will see him reunite with Emmy Award nominee Rhea Seehorn, best known for her role as Kim Wexler in Better Call Saul. Fans of the Veep actress will be pleased to hear Seehorn is now set to take center stage as the lead in Gilligan‘s upcoming epic.

“After fifteen years, I figured it was time to take a break from writing antiheroes… and who’s more heroic than the brilliant Rhea Seehorn? It’s long past time she had her own show, and I feel lucky to get to work on it with her,” Gilligan said about the news. “And what nice symmetry to be reunited with Zack Van Amburg, Jamie Erlicht and Chris Parnell! Jamie and Zack were the first two people to say yes to Breaking Bad all those years ago.”

In true Gilligan style, few details have been unveiled about the project. However, a report from Deadline earlier this year, revealed that the show would see the producer step away from his mastermind productions of drugs and crime. It is expected that Gilligan‘s new venture will offer fans a refreshed take on the producer’s signature stamp, opting for a marriage of drama and comedy instead of his usual crime cocktail. In August, the publication teased the show will be “thought-provoking but not a morality tale, the new show is expected to carry the signature Gilligan tone that infuses drama with humor.”

News around the new show comes just a month after Better Call Saul, which starred Bob Odenkirk in the titular role of lawyer-come-con-man, officially wrapped. After a massively successful six-season run, the show went out with a bang, captivating an audience of 2.7 million. The series finale was the most-watched episode on AMC since the series’ Season 3 finale.

Whilst Breaking Bad and Better Call Saul are likely to be the first shows that come to mind when Gilligan‘s name is mentioned, the producer, writer, and director’s catalog of credits is extensive. He wrote and directed Breaking Bad spin-off El Camino: A Breaking Bad Movie, which saw Aaron Paul return to his much-adored role as Jesse Pinkman. Gilligan also co-wrote the screenplay for Will Smith‘s 2008 superhero fantasy Hancock. His other notable credits include executive producing a number of episodes of The X-Files and comedy Battle Creek.

Gilligan‘s untitled project does not yet have a release date, but more details are expected to follow. Stay tuned at Collider for future updates!