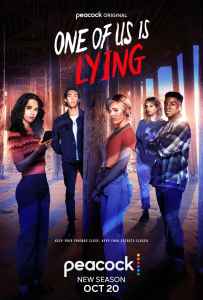 Peacock has released a new trailer for One of Us Is Lying, a young adult murder mystery series based on the book of the same name by Karen McManus. The series follows a group of high school students who are suspects in the murder of one of their classmates.

During the first season of One of Us Is Lying, Bronwyn (Marianly Tejada), Nate (Cooper van Grootel), Addy (Annalisa Cochrane), Cooper (Chibuikem Uche), and Janae (Jessica McLeod) uncover the mystery of Simon’s (Mark McKenna) death after their darkest secrets get painfully revealed in the investigation. By the season finale, the group also corners the murderer, Jake (Barrett Carnahan), who gets shot by accident and killed. Vowing to bury the past, the group hides Jake’s body and prepares to move on with their lives. However, in a nerve-wracking cliffhanger, the five students receive a text from someone named “Simon Says,” who reveals they know about Jake’s death.

Season 2’s trailer picks up right where we left the Murder Club, as they get blackmailed into participating in a twisted game. If they don’t want Simon Says to reveal their secret, they must do whatever is asked of them. However, as the trailer shows, that means breaking the law, betraying each other’s trust, and putting themselves at risk. How far are the Bayview students ready to go to keep their secrets? And will they uncover who’s blackmailing them before they lose their lives? Season 2 of One of Us Is Lying puts an exciting spin on the first season’s mystery, leading the series in new and exciting directions.

Season 2 of One of Us Is Lying debuts on Peacock Thursday, October 20, just in time for Halloween. Just like the first season, Season 2 also comprises eight one-hour episodes. Check out the new trailer and Season 2’s synopsis below.

Following the heart-pounding conclusion of Season One, the Bayview Four have a very deadly secret. In Season Two we’ll see just how far they’ll go to protect their secret, themselves, and each other.