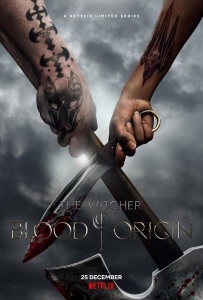 The Witcher has become one of Netflix‘s most popular shows, and it has now been announced that acclaimed actress Minnie Driver will be joining the cast of the property’s upcoming prequel miniseries, The Witcher: Blood Origin.

The streaming service announced during its TUDUM fan event that Driver would be joining Blood Origin as the show’s narrator, in addition to becoming one of its main characters. She will play a Seanchaí, according to TUDUM, which is described as a “shapeshifting collector of old lore with the abilities to travel between time and worlds”. Her character is considered somewhat of a “tour guide” for the audience as the series progresses. Series co-creator Declan de Barra said during an interview with TUDUM that Driver‘s character was “essentially a collector of stories that are forgotten. She believes this story needs to be told again in the modern Witcher world for progress to be made in the future.” Driver herself said, “Where The Witcher came from is a whole world, and you need some help understanding that,” adding that she was “pivotal in helping people understand where this origin story comes from.”

Additional details about the prequel are being kept mostly under wraps. However, it is known that the show will be set approximately 1,200 years prior to the events of The Witcher – which stars Henry Cavill and is based on the popular books of the same name. Cavill plays Geralt of Rivia, a magically mutated monster hunter known as a ‘Witcher.’ Blood Origin will reportedly explore the creation of the first Witcher, as well as events surrounding ancient elves that help to set up the premise of the original show, in which monsters, elves, and humans all collide due to the Conjunction of Spheres. Beyond Driver, Blood Origin will star Sophia Brown, Laurence O’Fuarain and Michelle Yeoh, the latter of whom is coming off of her critically acclaimed role in Everything Everywhere All at Once.

Blood Origin was first announced in 2020, following the success of The Witcher’s first season in 2019. British actress Jodie Turner-Smith was cast in a starring role in January 2021, but was forced to drop out due to scheduling conflicts. Brown would then take over the starring role, in which she will play Éile, a Queen’s guard warrior who leaves her past behind to become a musician. This is just one of a number of changes that Blood Origin has seen, with a number of reported reshoots taking place earlier this year. The number of episodes was also cut down from six to four.

For Driver, Blood Origin marks a different type of project for the acclaimed actress. Perhaps best known for her Academy Award-nominated performance in the 1997 classic Good Will Hunting, Driver has also lent her acting chops to a number of other notable films, including Phantom of the Opera, Goldeneye and Princess Mononoke. While she is most well known for her work in films, this will not be Driver’s first time on the small screen, as she has additionally endeared herself to audiences with a recurring role on the NBC sitcom Will and Grace, and also starred in the canceled ABC show Speechless. It is unclear how much Driver‘s role will play into the story arc of Blood Origin, but given that she can essentially time-travel, it could be possible that she may be seen alongside Cavill in the upcoming third season of The Witcher, which is slated to premiere in Summer 2023.

The Witcher: Blood Origin will stream on Netflix on Dec. 25. A better look at Driver‘s character can be seen below: