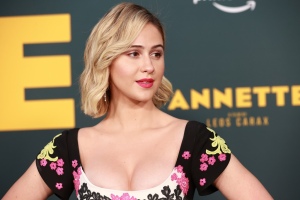 Deadline reports that Bakalova has joined the cast of the Rome-set drama-thriller, which will be helmed by first-time director Hala Matar. The film centers on Dylan (Wein), a journalist, and Lucy (Cowen), his photographer and partner, who travel to Rome to interview Milo (Farthing), a famous musician, only to get caught in a web of intrigue, betrayal, and death. Bakalova will play Francesca, Milo’s performance artist girlfriend. Matar says she is “thrilled to be making my first feature film in one of the most beautiful countries in the world with this incredibly talented team of people.” Filming for the thriller has already begun in Italy.

Bulgarian actor, Bakalova made her English-language debut in 2020’s Borat Subsequent Moviefilm, playing the titular Kazakh journalist’s daughter, Tutar. For her role, she received significant critical acclaim and was nominated for an Academy Award and a Golden Globe. She subsequently appeared in Judd Apatow‘s pandemic comedy The Bubble, and in this summer’s sleeper hit murder mystery Bodies Bodies Bodies.

Bakalova has a busy slate of films on her schedule; she will next be seen in the prison gang drama Branded, Jerry Seinfeld‘s Unfrosted: The Pop-Tart Story, and the AIDS drama Fairyland, and will be heard as the voice of Cosmo the Dog in Guardians of the Galaxy Vol. 3. She will also star in and produce the Bulgarian satirical comedy Triumph.

Wein is an actor and director whose most recent film, the apocalyptic comedy How It Ends, came out last year; his romantic comedy, Something from Tiffany, which stars Zoey Deutch will debut on Prime Video this year. Meanwhile, Farthing recently played Charles, the then-Prince of Wales in Spencer while Cowen starred in The Chilling Adventures of Sabrina and Fate: The Winx Saga.

Stay tuned to Collider for more updates on the project.