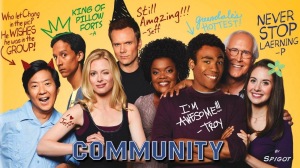 The prophecy was foretold, and the prophecy shall come to fruition. Since its original run in the early 2010s, Dan Harmon‘s cult favorite sitcom Community has promised six seasons and a movie. And up until now, that promise has only gone partially fulfilled, that is until today when Peacock announced that the Community movie is officially in the works. Along with this news, Peacock also announced today that all six seasons of the fan-favorite series will be available on NBC‘s streaming app.

Community originally premiered on NBC in 2009. The series quickly became a cult hit, with fans gravitating to Harmon‘s unconventional and often esoteric plot lines. Loosely speaking, the series follows a study group at Greendale Community College and the various shenanigans that each member of the ragtag bunch gets into. However, many episodes of the show often plunged into worlds of their own, taking on different themes and experimental story structures, giving the show a meta-structure that was years ahead of its time.

Many of the series’ original stars are attached to return for the film, including Alison Brie, Joel McHale, Daniel Pudi, and others. However, Peacock did not announce the return of Donald Glover and Yvette Nicole Brown though McHale tagged both of the stars in his tweet about the upcoming movie.

Peacock‘s acquisition of the series for streaming will allow fans to view the entire collected six seasons (and yes, the movie when it is released) on one single streaming platform. This is big news for a series marred by frequent platform shifts. Community‘s final season was pushed to Yahoo! after a fractious split from NBC.

“Community was light years ahead of its time when it premiered on NBC in 2009,” said Jason Clodfelter, Co-President, Sony Pictures Television Studios. He continued, saying, “…we are thrilled to once again visit the brilliant minds of Dan Harmon, Andrew Guest, and this impeccable cast. We are grateful to Peacock, our partners at UTV, and to all the zealous fans who have cherished this iconic show.”

“This franchise is the very definition of community,” added Erin Underhill, President, Universal Television. “We’re excited to bring the band back together and continue the journey of these beloved characters.”

“‘Six seasons and a movie’ started out as a cheeky line from Community’s early seasons and quickly ignited a passionate fan movement for this iconic, hilarious and cool (cool, cool) NBC comedy,” said Susan Rovner, who serves as Chairman of Entertainment Content at NBCUniversal Television and Streaming. “We’re incredibly grateful that 15 years later, we are able to deliver fans this promised movie and can’t wait to get to work with Dan Harmon, Andrew Guest, Joel McHale, Sony, and our partners at UTV to continue this epic comedy for Peacock audiences.”

Details regarding the release and exact plot of the upcoming film are still foggy. But the news will certainly inspire many Community fans to re-watch the series in preparation. And news of the series’ addition to the Peacock library is certainly a reason to celebrate. Peacock has not shared the exact date that the series will hit the streamer so stay tuned at Collider for future updates.