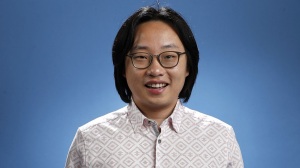 Hulu has officially ordered a 10-episode season of Interior Chinatown, a television adaptation of Charles Yu‘s 2020 bestselling novel of the same name. Yu will serve as the creator and executive producer of the series. Hulu‘s Interior Chinatown will star Jimmy O. Yang as an extra in a police procedural show who gets embroiled in a real-life crime caper. The pilot episode of the series will be directed by Taika Waititi, who will also serve as an executive producer.

Interior Chinatown follows Willis Wu (Yang), a background actor in a crime series titled Black & White. Waiting tables on the side when not acting, Willis grows bored with his life fading into the background in Chinatown. One day, Willis finds himself the witness to an actual real-life crime. This event leads Willis to uncover a whole criminal underworld in Chinatown, which leads him to actually be pushed into the center of attention for once in his life.

Interior Chinatown is being backed by 20th Television, Rideback, Participant, and Dive. In addition to Waititi, Dan Lin, Lindsey Liberatore, Elsie Choi, Jeff Skoll, Miura Kite, and Garrett Basch will serve as executive producers on the show. Yu’s novel was very well received when it was initially published, winning the 2020 National Book Award for Fiction. Yu also wrote the 2010 novel How to Live Safely in a Science Fictional Universe and the short story collections Third Class Superhero and Sorry Please Thank You. Yu is a screenwriter as well, having written episodes of the shows Westworld and Legion.

Yang is an impressive up-and-coming actor who started out in the 2010s in several walk-ons and bit roles in shows like 2 Broke Girls, It’s Always Sunny in Philadelphia, and New Girl. Yang started to catch mainstream attention when he starred in HBO’s Silicon Valley as Jian-Yang, and again when he appeared as Bernard Tai in the film Crazy Rich Asians. Since then, the talented and funny actor has appeared in many films including Like a Boss, Fantasy Island, The Opening Act, Love Hard, and most recently, Me Time. Yang will next be lending his voice to the animated films The Silk Road Rally and The Monkey King.

Waititi has catapulted into stardom in recent years, being considered a masterclass director. Waititi started off directing indie favorites likeEagle vs Shark, Boy, Hunt for the Wilderpeople, and What We Do in the Shadows, the latter of which was adapted into a hit FX series. Waititi’s career exploded after he directed 2017’s Thor: Ragnorok, and further-more when he helmed the Oscar-winning satire Jojo Rabbit. Waititi most recently directed Thor: Love and Thunder, while his upcoming Next Goal Wins will be released next year.

Interior Chinatown does currently have a release date.