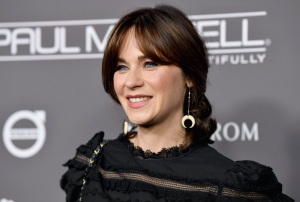 Plans are already being set in motion for the hotly anticipated third season of Apple TV+‘s hit dramedy, Physical. Following news of its renewal for a third season two months ago, the streamer has now announced the addition of Emmy and Golden Globe nominee Zooey Deschanel (New Girl) to further boost its already stellar cast. Deschanel will be seen in a new series regular role as Kelly in what marks her return to the small screen since the curtains came down in 2018 on her career-defining role as Jess in the sitcom New Girl which was a hit at Fox.

Deschanel‘s Kelly is described as a network sitcom star who has decided to extend her influence to the booming world of the fitness industry. Season 2 of the show left audiences on a cliffhanger as its lead Sheila Rubin (Rose Byrne) was left distraught after being informed by her husband of the arrival of a new competitor in town right after she had finally mustered the courage to launch her first fitness video. Per her character’s description, it seems that Kelly might be that new competitor, or at least, one of many rivals to Byrne‘s fledgling business.

Deschanel was a regular fixture in the indie circuit appearing in several films before establishing herself as a TV star with New Girl which premiered in 2011 and ran for 7 successful seasons, ending in 2018. In addition to her starring role, Deschanel stepped behind the camera as a director in one episode and also served as the producer and executive producer. The role earned her a Critics Choice Award for Best Actress in a Comedy Series as well as several Golden Globe nominations and one Emmy nod. Some of her notable films include 500 Days of Summer, the 2003 hit holiday movie Elf and the animated family comedy Trolls (2016). Deschanel will next be seen as Nancy in Bill Pohlad‘s biographical film, Dreamin’ Wild which recently made its world premiere at the 79th Venice International Film Festival, and in Brazillian animator, Carlos Saldanha‘s live-action directorial debut, Harold and the Purple Crayon.

Deschanel will be joining Byrne, Dierdre Friel, Della Saba, Lou Taylor Pucci, Paul Sparks, Ashley Liao, and Geoffrey Arend, all of whom have received resounding praise for their performance as a team. From the stables of Tomorrow Studios (an ITV Studios partnership), Physical is created, written, and executive produced by Annie Weisman. Byrne also produces along with Marty Adelstein, Becky Clements, Alissa Bachner, Stephanie Laing, and Craig Gillespie. Laing directs but occasionally shares her chair with Gillespie, Liza Johnson, and Dan Lazarovits.

Apple TV+ is yet to set a release date for Physical Season 3, however, you can catch up on the first and second seasons currently streaming on the platform.

Here’s the official synopsis for Physical;

Set in the idyllic but fragile beach paradise of sunny 1980s San Diego, Physical follows Sheila Rubin (Byrne), a quietly tortured, seemingly dutiful housewife supporting her smart but controversial husband’s bid for state assembly. But behind closed doors, Sheila has her own darkly funny take on life she rarely lets the world see. She’s also battling a complex set of personal demons relating to her self-image… that is, until she finds release through the unlikeliest source: the world of aerobics.