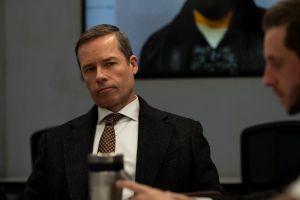 Actor Jeffrey Dean Morgan and Guy Pearce have boarded The Exchange’s Neponset Circle, Variety has reported. Based on a real-life murder that remains unsolved to this day, the movie is being described as a “dark and gritty crime thriller.” The feature is written by John Chase, and will be directed by Pauline Chan follows Jimmy O’Mannon, a brilliant but disgraced detective, who came fresh out of prison and is trying to rebuild his life. Things take a horrific turn when Jimmy finds himself plunged into a case tracking down a serial killer that his former partner and best friend Ray Delaney is investigating. As the two delve deeper into the case and the body count mounts, Jimmy’s personal world turns into a waking nightmare.

The story would be told against a backdrop of politics and corruption and seems like a thriller that will keep the audience on the edge of their seats from start to finish. Speaking of the project Nat McCormick, The Exchange’s worldwide sales and distribution president, said, “With this thrilling and bone chilling mystery at its core, audiences across the world will flock to Pauline’s fresh vision, which will be executed by Guy Pierce and Jeffrey Dean Morgan who couldn’t be more perfectly cast in their roles.”

Emmy-winning Australian actor Pearce was last seen in HBO’s Mare of Easttown and previously collaborated with Chan on 33 Postcards. His other credits include Todd Haynes‘ limited series Mildred Pierce, The Proposition, Animal Kingdom, The Rover, Holding the Man, and The Wizards of Aus. His feature film credits include Tom Hooper‘s historical drama The King’s Speech, Ridley Scott‘s Prometheus, the Marvel Studios’ Iron Man 3, Alien: Covenant, and the historical biopic Mary Queen of Scots among others. The Walking Dead fame Morgan has features like Supernatual, Grey’s Anatomy, and The Good Wife among others to his credit. His feature film credits include Fall, The Postcard Killings, Batman v Superman: Dawn of Justice, Walkaway Joe, and more. He’ll next be seen in Amazon Prime’s Superhero series, The Boys.

No other details about the projects have been revealed yet, stay tuned to this space for more updates on Neposent Circle.